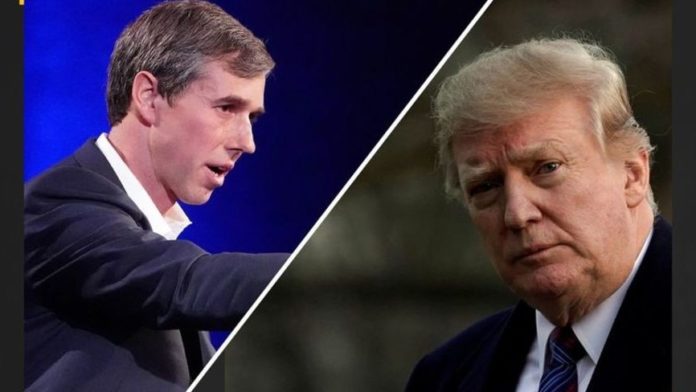 At his border wall rally in El Paso, Texas, Monday night, President Donald Trump proclaimed that 35,000 people were in attendance, though he provided no proof of that claim:

Trump’s son, Don Jr. then parroted that lie on Twitter:

Beto trying to counter-program @realdonaldtrump in his hometown and only drawing a few hundred people to Trump’s 35,000 is a really bad look.

Partial pic of the Trump overflow crowd below! #AnyQuestions pic.twitter.com/PKxkbcFNFO

But it turns out that (as usual) both father than son were lying their butts off.

According to the El Paso Fire Department, the crowd estimate on Trump’s rally was 6,500. a A counter rally hosted by Beto O’Rourke drew 10-15,000, making it twice the size of the incumbent president’s:

It’s also worth noting that the vast majority of the people at the Trump rally came into El Paso from out of town and even out of state.

If Monday night is a sign of Trump’s popularity (or lack thereof) in a deep red state like Texas, that should be of special concern to Republicans, because they may not be able to hold the Lone Star State in 2020, especially if O’Rourke happens to be on the presidential ticket.

If only there was a way to prove this. Oh wait, there is. Local officials said the garbage you call dad got 6500 inside and 3000 outside. They estimate Beto got 12,000-15,000. But then, Trumps aren’t known for truthfulness or intelligence.

The El Paso Coliseum only holds 5,200. And you’re trying to say there was room in the parking lot and surrounding area for 30,000 people? Here’s a ? Where did you get your education? Trump University?

I’ve heard people with small hands and short fingers have trouble counting accurately. Is that true?

You and your pops really focus on size a lot…. compensating for something maybe? When Hillary had more votes neither of you touted the “size” argument then.