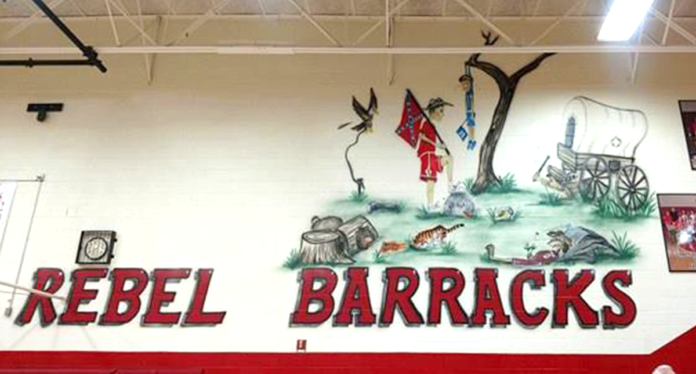 You would think that painting a huge mural depicting a boy carrying a Conferedate flag next to the depiction of the lynching of an athletic team school rival would probably automatically be seen as inappropriate for any school in America.

And, you’d be wrong.

“I guarantee you the black children noticed it, and the white children don’t need to see this either.”

The South Cumberland Elementary School gym in Crossville Tennessee, 100 miles east of Nashville, featured a huge Confederate flag and a large hand-painted mural sure to leave most any rational person’s mouth wide open.

But there it was until repeated complaints by a parent combined with a viral social media post brought sufficient attention to the matter and the district had the murals painted over.

It’s not clear how long the murals had been featured in the school. Clarke said:

“Germany does not display Nazi symbols. This is not heritage, it is racism.”

Clark’s Facebook post went viral went he posted it on Friday, and less than 24 hours later, the school had painted over the murals.

Nevertheless, comments on Clark’s Facebook post became nasty, with many supporting the mural, complete with the lynching, excusing it as part of their proud “heritage” as the old lame excuses go. Nevermind that African Americans who were subject to actual lynchings might find the mural or the enormous flag horrifying.

One Facebook user shared the following video from Crossville.

It sure looks like this town has a much bigger problem on its hands:

The school Principal responded to CNN:

“Concerns regarding graphics in our gymnasium have been dealt with by removing the rebel flags painted on the wall, and by modifying the mural on the wall as well,” school principal Darrell Threet said in a statement to CNN.

While he was glad to see the mural removed, the parent wondered about the judgment of those who approved it in the first place.

“Removing it didn’t seem like a priority… but white supremacy in this country is becoming too organized and too emboldened to ignore something like this in our schools,” he said. “I am glad they got to painting, but I am not sure why they ever wanted lynching a part of their school spirit.”

According to a report from Fox17, Nashville, some residents thought the mural was just fine the way it was.

“It’s part of our heritage and how they were brought up so I just don’t have a problem with flying the rebel flag,” Wendy Reed said. “Kid hanging that would bother me, but sometimes I think we just make it bigger than it needs to be.”

Others, fortunately, saw the person hanging as offensive:

“It is kinda offensive to have somebody hanging like that,” Darlene Kessler said.

Although it took effort from one person repeatedly speaking out, the murals were finally removed. Mr. Clark’s example can teach us plenty about refusing to remain silent when confronted with racism in America, especially since the Trump administration has exacerbated racial tensions everywhere, it seems.

See more from Fox17 Nashville below:

For more, watch this charming commentary from Tennessee resident, LaShanda: