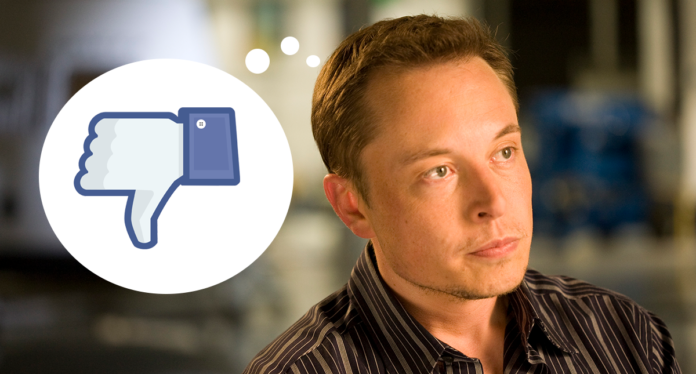 Elon Musk, founder of the ultra-futuristic SpaceX company and co-founder of Tesla, Inc. responded to questions about his own allegiance to Facebook by deleting his business accounts.

Facebook faced protests since the public learned that Cambridge Analytica harvested the personal data of 50 million Facebook users, which may have played a significant part in swaying the outcome of the presidential election to Donald Trump.

Facebook stock shares saw a significant drop after the scandal broke, and they could drop even further, considering Elon Musk’s influence.

Some are calling for Facebook users to #deletefacebook, including WhatsApp founder Brian Acton, who gave Musk the push to follow suit. Apparently, Musk was already not much of a follower, since he coyly responded to Acton’s comment with, “What’s Facebook?” on Twitter.

In another more recent post, Musk responded to one of his followers on Facebook, who wanted him to stay, saying simply, “You’ll live.”

Musk asserted that he had never advertised on Facebook and implied that the social media giant would live or die on its own merits.

We’ve never advertised with FB. None of my companies buy advertising or pay famous people to fake endorse. Product lives or dies on its own merits.

He also gave a nod to another social media platform, Instagram, and said that dropping Facebook wouldn’t really affect Tesla or SpaceX.

Instagram’s probably ok imo, so long as it stays fairly independent. I don’t use FB & never have, so don’t think I’m some kind of martyr or my companies are taking a huge blow. Also, we don’t advertise or pay for endorsements, so … don’t care.

In another comment, Musk replied to the story that Mark Zuckerberg had “thrown shade” at Musk for accidentally blowing up one of Facebook’s new satellites in 2016. The Daily Beast reported on the incident, calling it a “tech billionaire feud.”

Facebook’s geostationary satellite was designed to deliver internet to parts of the African continent, but as Zuckerberg arrived in Kenya to celebrate the occasion, news arrived that Musk’s Falcon rocket blew up, literally incinerating Zuckerberg’s plans.

Musk gave Facebook a free launch for another satellite. The estimated cost for such a launch, including insurance and one-year’s operation: $85 million.

Yeah, my fault for being an idiot. We did give them a free launch to make up for it and I think they had some insurance.

In the big picture, it looks like Facebook has bigger problems than Elon Musk. Business Insider posted an article about the trending hashtag, #DeleteFacebook, along with instructions on how to do it.

As for the blogging community, remaining on Facebook means we can reach people like you, delivering fact-based news to counter all the propaganda and fake news, Russian and otherwise.

Hopefully, Facebook makes substantial strides in countering the misinformation and exploitation that its users have recently been subjected to. If they don’t, the number of people following Musk’s lead will no doubt grow.

See more about Elon Musk’s influential decision on deleting Facebook from MSNBC below: