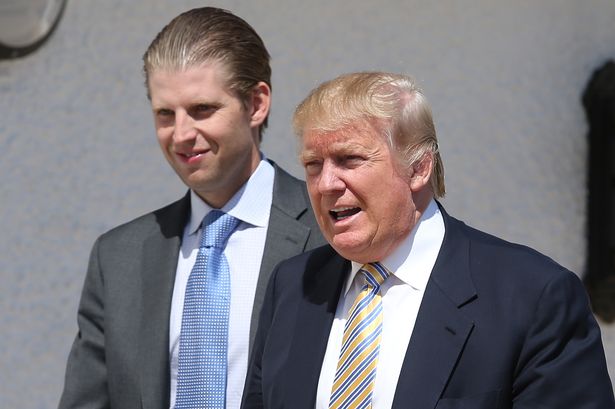 Much like his father, Eric Trump absolutely hates when the media dares to report something negative about anything with the name “Trump” attached to it.

On Sunday, NBC News reported that at least 12 workers had been fired from Trump’s Westchester County golf club for being undocumented immigrants. According to the fired employees, top officials at the club knew they were living in the U.S. illegally. One of them, Gabriel Sedano, told NBC:

“I told them no, so … after that they say so the company cannot keep you there. I start crying because I told them — like, I’ve been working for so long. The only thing I did wrong was work, work and work.”

But according to Eric, it’s shameful and “truly heartbreaking” that NBC made his father and the golf club look bad:

(1/2) To think that a dam broke in Brazil (with 37 fatalities & many missing), Venezuela is in shambles, and so much more, yet @NBCNews leads with another anti-Trump story (that among 10,000+ hospitality employees, a few admitted to giving fake IDs to gain unlawful employment),

(2/2) just shows how pathetic the #MSM has gotten. I must say, for me personally, this whole thing is truly heartbreaking. It demonstrates our immigration system is severely broken and needs to be fixed immediately. Congress, stop going to Hawaii on vacation and do your damn job!

Who is on vacation in Hawaii? Congress is currently in session and no one takes as many vacations/golf days/TV watching time than the current president.

Also, how big of a hypocrite can Eric and his entire family possibly be? They hire undocumented workers and then only fire them when its politically expedient, destroying the lives of these people who merely want to work and provide for their families.

Fortunately, social media took Eric down a few pegs for his whining:

OMG! Your analysis is so astute! What a moronic thing for NBC to do, lead w a story about President “Build a Wall/Lynch Mexicans” hiring illegal immigrants. That Brazilian dam story has a major impact on millions of Americans’ lives. Have you ever through of being a news editor?

Why is it anti-Trump, Eric? Your companies hire undocumented employees & encourage/guide them in obtaining forged documents so that you can hire them at a much lower rate. Your daddy claims to be hard on immigration so naturally this is going to be of interest. #CorruptTrumps

The leader of our country should serve as a role model. It seems to me that he, because his is Trump, thinks it is fine to hire illegal workers, but the rest of us must follow the laws. I want a law-abiding president.

Companies like the Trump Organization who don’t use e-verify system and then blame immigrants for working for them is a HUGE problem with system. That makes YOU a criminal for hiring illegal immigrants. They’ve worked for your companies for years, don’t pretend you didn’t know.