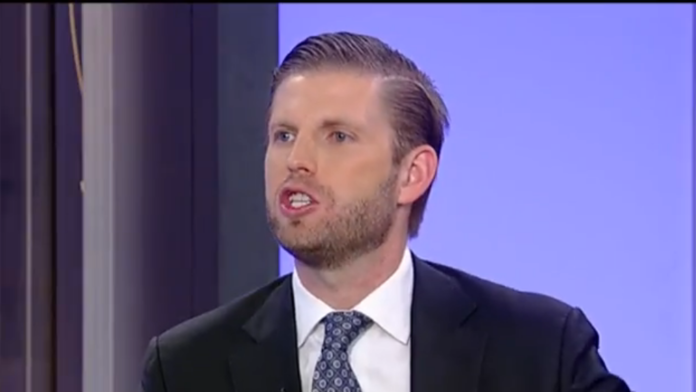 Though he’s currently serving as trustee of the Trump Organization while his daddy fleeces the country as president, Eric Trump clearly doesn’t know the meaning of the word irony, as he demonstrated Thursday during an appearance on “Fox & Friends.”

Host Steve Doocy began the interview with Eric by noting that someone had recently hollered at Senator Ted Cruz (R-TX) in an airport, which led him to ask:

“Has anybody gotten up in your face?”

“The lack of civility is something that always bothers me. I mean, look at Eric Holder a couple of days ago, you know, ‘When they’re down, we kick them in the head.’ Who says this?”

Actually, Holder commented: “We they go low, we kick them.” He also made sure to add that he was only speaking hyperbolically.

“Who does that? They are the first ones to say, you know, ‘Trump, he promotes evil and he’s racist and he’s sexist.’ And then you hear these people.

However, Eric conveniently forgot to mention that just this week his father referred to adult film actress Stormy Daniels as having a “horseface.”

Much like his daddy, Eric did manage to tell a whopping lie when asked about the torture and murder of journalist Jamal Khashoggi by a hit squad believed to be under the direct control of Mohammed bin Salman, the crown prince of Saudi Arabia:

And yet, as recently as 2014, Eric Trump told a reporter:

“We don’t rely on American banks. We have all the funding we need out of Russia.”

As for Saudi Arabia, Eric’s own father had this to say about them during his run for the White House in 2015:

“Saudi Arabia, I get along with all of them. They buy apartments from me. They spend $40 million, $50 million.

“I make a lot of money from them.

“They buy all sorts of my stuff. All kinds of toys from Trump. They pay me millions and hundred of millions.”

When it comes to “civility,” it sounds like Eric needs to look in the mirror and then give daddy a call.

Here’s the full interview from Fox: