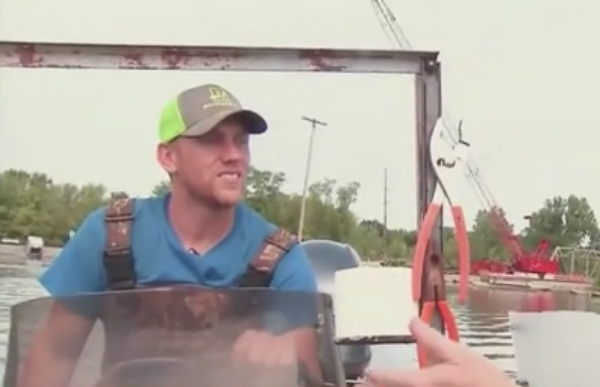 President Donald Trump’s trade war has taken its toll on farmers across the country and one fourth-generation Missouri farmer told CNN why this week from his flooded property.

Storms have flooded out many Missouri farms this year. As a resident of the state, I can attest that flood waters have caused a disaster for farm country here. Driving through some parts of the state you can witness flood waters on either side of the highways and wonder if you’ll become swept up if they get any higher during a storm.

Farmers, meanwhile, are helpless as floods put an end to the growing season because, by the time the waters recede, it will be too late to grow anything.

And because of Trump’s trade war with China and the fact that China is retaliating by not buying from America, farmers are losing billions of dollars and will likely be broke until after next season.

“We’re in four feet of water. So halfway up the grille of the tractor,” Missouri farmer Adam Jones told CNN while steering a boat in his flooded fields in St. Louis County. “We aren’t going to make any money this year.”

Trump has promised them bailout money, but it’s not enough to cover their losses, and it wounds their pride.

And Trump is denying Jones and many farmers access to that free market by enacting tariffs that bring trade to a screeching halt and which may never normally resume as China goes elsewhere for its food supply needs.

Jones says that Trump is shooting himself in the foot when it comes to farmers, most of whom voted for him in 2016.

“Most farmers are still supporting President Trump, but I think it is wearing out,” he said. “The flooding is obviously more difficult. The tariffs might be more frustrating, because somebody has control over the tariffs.”

Trump could end his trade war today and hope that China will immediately begin purchasing from our farmers again to soften the blows they have already suffered. But that is unlikely. And that hurts the men and women who take pride in tilling and seeding and harvesting every year in order to feed our nation.

“You don’t get your food from the grocery store,” Jones concluded. “I mean you get it from the grocery store, but we’re out here working our tails off to grow it for you. Farming is a passion. It’s what I love. We don’t farm for money. It is what I love. I mean my dad does it, he did, my grandpa did it, my great-grandpa did it, right here on this land. Fourth generation on this farm. And I take pride in that. And I just have a passion for agriculture. Unfortunately.”

“We’re not gonna make any money this year.”

Flooding has dealt another blow to farmers like Adam Jones, whose land is covered in 4 feet of water, already reeling from the China trade war.

“Most farmers are still supporting President Trump, but I think it’s wearing out.” pic.twitter.com/wZCkcWNdfN