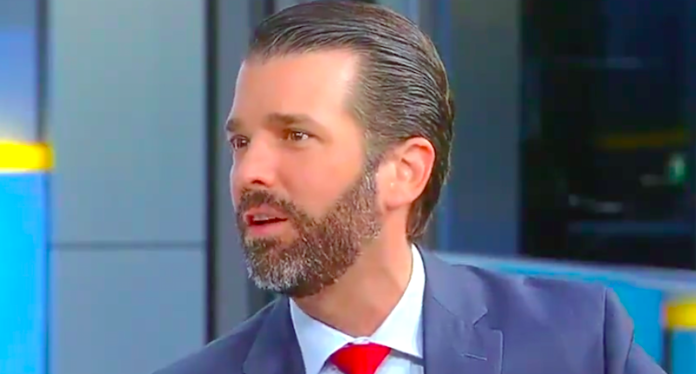 While Special Counsel Robert Mueller didn’t unveil any new indictments when he submitted his report to Attorney General William Barr Friday, a former federal prosecutor is warning that Donald Trump Jr. is far from being in the clear legally and is probably going to see his name on an indictment very soon.

Appearing on “AM Joy” Saturday morning, Mimi Rocah, who served as an Assistant U.S. Attorney in the Southern District of New York, was asked by host Joy Reid:

“In your view, is the confidence of Donald Trump Jr. — he’s out there, has his new beard, feeling good — should he be feeling so confident?”

“No. I don’t think it’s only because of the SDNY. I’ll get to that in a second. As to the Mueller Russian piece of it, Don Jr. was never subpoenaed or charged — he hasn’t yet been charged. I’m not convinced that there is not a charge in his future as to the Russian piece.”

And then Rocah added that Junior is also facing legal problems because he signed one of the checks used to provide hush money for Stormy Daniels, who alleges she had an affair with President Donald Trump:

“But I will answer your question. On the Southern District of New York, he’s in clear jeopardy. Now — he’s not the president so there isn’t that debate of could he get charged. He has been implicated in a crime — the crime is this campaign finance contribution scheme which is actually the words the southern district used to describe it.”

When it comes to Russia, keep in mind Don Jr. was one of three people (the other two being Jared Kushner and Paul Manafort) who met with Russian nationals at Trump Tower in 2016. The New York attorney general could indict Junior for that. And the SDNY (along with the state of New York) could also indict Don Jr. for the payoff scheme, among other crimes involving alleged money laundering.

In other words, Don Jr. may want to hold off on any celebrations until the other shoes drop.