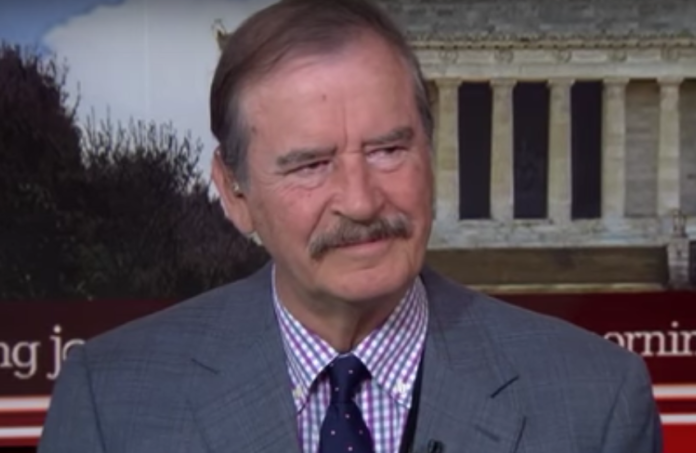 In response to President Donald Trump’s latest attack on Mexico and immigrants, former Mexican President Vicente Fox crushed him during an appearance on Morning Joe on Friday.

On Thursday, Trump insisted that the United States must change our border laws because women traveling here from Central America with the “caravan” he has been so obsessed with as of late are allegedly “raped at levels nobody has ever seen before.”

“And remember my opening remarks at Trump Tower when I opened,” Trump began in reference to his presidential campaign announcement in 2015 when he accused Mexicans of being rapists. “Everybody said, ‘Oh, he was so tough,’ and I used the word rape. And yesterday, it came out where this journey coming up, women are raped at levels that nobody has ever seen before. They don’t want to mention that. So we have to change our laws.”

It’s a bizarre excuse to militarize our border. One would think we would do the opposite and let these women through so they can receive medical attention. After all, militarizing our borders won’t stop immigrants from trying to get here, and it certainly won’t prevent rape.

During his appearance on Morning Joe, Vicente Fox accused Trump of lying.

“He lies, lies, lies, lies again to the American people,” Fox said. “This kind of event, the so-called caravan happens every year. As a matter of fact, close to 500,000 Central Americans cross the border into Mexico, and 400,000 of them are sent back. Another 100,000 get into Mexico or around there and they decide to come to the States, but Mexico is doing its job, sending the people back to their homes, with a lot of compassion, humane attitude, not with a stick. Now, he lied about the rapist level there. Please, Trump, tell the truth to your people. Don’t lie to them every day. It’s not fair.”

Indeed, Trump’s claim has been fact-checked.

The risks of crossing the United States border are well documented. But The New York Times has been unable to find any news reports of rape in the caravan that has so captured the attention of Mr. Trump and the right-wing news media — whether by smugglers or cartels or even among the migrants themselves.

Fox went on to say his policies made Mexico safer and reduced the numbers of migrants flowing through his country towards the United States, and that Trump’s rhetoric is a threat to that progress because the Mexican government is considering cooperating less with our country, a move that would certainly hurt our us as well.

Vicente Fox pointed out that Mexico is a security partner and their military conducts exercises with our military to prevent threats from coming through Mexico to attack the United States. Trump’s rhetoric could end up straining that relationship, especially as Trump sends troops to militarize the border.

Fox also noted that if the United States legalized drugs such as marijuana, it would take money away from the cartels and weaken them.

But then Fox turned to NAFTA and Trump’s threats to withdraw from the trade deal, warning American farmers that Mexico is beginning to buy more agricultural products such as corn from nations such as Brazil in response.

“U.S. farmers, watch out,” Fox said. “Mexico buys from you every year over $40 billion worth of corn, and now we went down south to buy that corn from Argentina, from Brazil. So you’re going to be hurt. You better speak up because this guy is taking you nowhere — and you consumers, you consumers, this trade war, you’re going to pay the price.”

If anything Trump should be pursuing a closer relationship with Mexico, not antagonizing the Mexican people and the Mexican government. Illegal immigration is lower than it has been in decades. It is not a major problem, nor is the “caravan” Trump is obsessed with. It’s a group of people who are on their way to demonstrate at the United States border to highlight the harsh conditions and dangers immigrants face to get here. Trump acts like it’s an invasion. It’s not.

But Trump is making our relationship with Mexico worse instead, which will make it much harder to deal with immigration, drugs, and violence in the future, as well as weakening our national security and economy. Fox is right, America is going to pay a price for Trump’s words and actions. It’s only a matter of time.