The United States Blues
Home News Former Miss Michigan: Coming out as a conservative is ‘harder than coming... 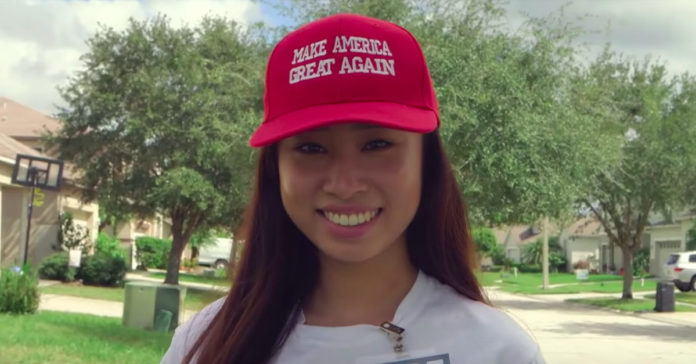 Former Miss Michigan Kathy Zhu, who was stripped of her title after tweets she sent were deemed to be “offensive, insensitive, and inappropriate,” is now claiming that admitting to being a political conservative is harder than coming out as gay.

Speaking at an event hosted by the Michigan Trump Republicans, Zhu, who serves as vice president of the college Republicans at the University of Michigan, remarked:

“After I came out as a conservative, which I think is very hard to do nowadays – it’s harder than coming out as openly gay. Ever since junior year, I’ve been ridiculed online, bullied online, on Twitter and Facebook. … People [told me] I was a white supremacist, even though I’m Asian. I don’t know why that’s even a thing.”

The comments from Zhu came just weeks after Miss World America organization got wind of her social media postings and took the title of Miss Michigan away from her.

While Zhu seems to think that being a conservative is the reason she lost her title, the facts suggest otherwise, according to The Hill:

Among other things, Zhu tweeted in 2017 that the African-American community needed to fix its own problems before criticizing others.

“Did you know the majority of black deaths are caused by other blacks?” she asked on Twitter. “Fix problems within your own community first before blaming others.”

She also reportedly tweeted in 2018 about a Muslim student group allowing people to try hijabs on.

“So you’re telling me that it’s now just a fashion accessory and not a religious thing?” she tweeted, according to the Detroit Free Press. “Or are you just trying to get women used to being oppressed under Islam?”

During her remarks to the Michigan Trump Republicans, Zhu also declared:

“If they were to (offer the crown back) I wouldn’t want to take it. I would rather be real about my stances and my beliefs than to than to back down and say, ‘yeah, I’ll accept this crown.’”

Not long after she lost her title, Zhu joined the 2020 Trump campaign, announcing on Twitter that she is now a part of the Women for Trump Coalition Advisory board.

While Zhu contends that her being a conservative is more traumatic than coming out as gay, she neglects to realize that the LGBT community in this country faces discrimination on many levels, including in fair housing and employment opportunities. And gay Americans are also more likely to suffer verbal and physical abuse than their heterosexual counterparts.

The fact that Kathy Zhu doesn’t realize just how offensive her latest comments are is proof positive that she, like Donald Trump, clearly doesn’t understand the most basic issues of equality and freedom this country was founded upon.