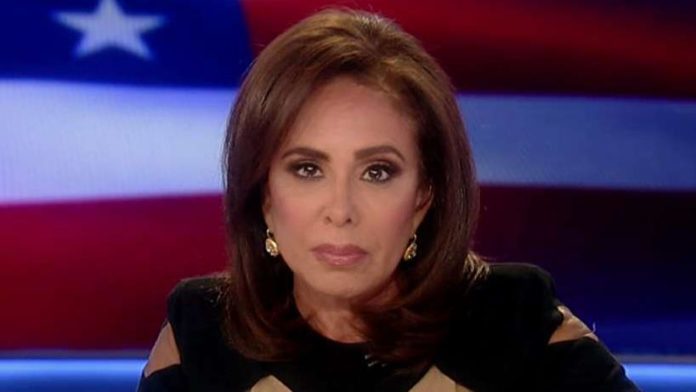 Just a week after she made controversial anti-Islamic comments about Rep. Ilhan Omar (D-MN) that got her slammed by Fox News, host Jeanine Pirro’s show was absent from the airwaves Saturday evening, replaced by a rerun of the documentary serious “Scandalous.”

Several advertisers have pulled their sponsorship of Pirro’s weekly show, with personal-finance marketer NerdWallet, pharmaceutical company Novo Nordis, and online marketplace Letgo all announcing they would no longer run ads during Pirro’s broadcast.

Last week, Pirro had this to say about Congresswoman Omar, who is Muslim:

“Think about this. She’s not getting this anti-Israel sentiment doctrine from the Democrat party…So if it’s not rooted in the party, where is she getting it from? Think about it. Omar wears a hijab, which according to the Quran 33:59, tells women to cover so they won’t get molested.”

Fox News responded quickly to Pirro’s hateful comments in a statement they released to the media which read:

“We strongly condemn Judge Jeanine Pirro’s comments about Rep. Ilhan Omar. They do not reflect those of the network and we have addressed the matter with her directly.”

Rather than apologize, Pirro issued this half-hearted statement claiming she had merely been trying to start a debate:

“I’ve seen a lot of comments about my opening statement from Saturday night’s show and I did not call Rep. Omar un-American. My intention was to ask a question and start a debate, but of course because one is Muslim does not mean you don’t support the Constitution. I invite Rep. Omar to come on my show any time to discuss all of the important issues facing America today.”

Pirro has also been silent on Twitter since March 10, and in light of the horrific mosque shooting in Christchurch, New Zealand this week, it seems unlikely that she will be commenting on the issue of Islam or religion anytime soon.