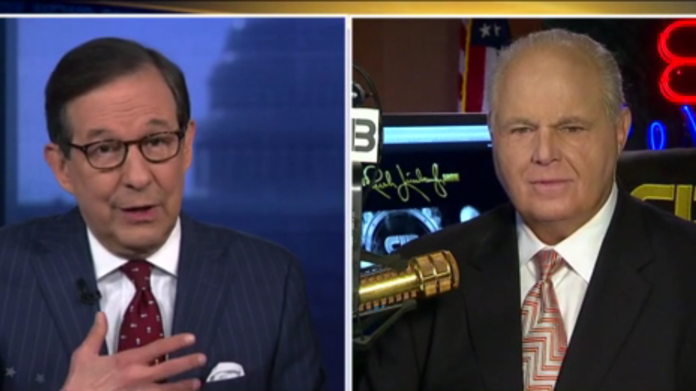 Fox News host Chris Wallace accused conservative radio host Rush Limbaugh of being a hypocrite for embracing President Donald Trump’s declaration of a national emergency so he can construct a border wall even though Limbaugh was critical of former President Barack Obama for issuing an executive order protecting DREAMers from being deported.

Wallace began by reminding Limbaugh of his past criticism of President Obama:

“I want to ask you about the game you say we play in Washington. Because the fact is when President Obama took executive actions, you were outraged. And as you would expect, I’ve got a couple of examples.”

The Fox host then noted Limbaugh had accused Obama of flushing the Constitution “down the toilet” when he acted to defer the prosecution of immigrants who had been brought to the U.S. when they were children:

There was a long pause before Limbaugh responded. He then proved the full depth of his blatant hypocrisy by replying:

“You may look at it that way. I don’t. I look at it, right and wrong. And what Obama was doing was furthering this existing problem and politicizing this using whatever executive powers he wanted to use.”

Politicizing the executive powers he wanted to use? That’s exactly what Trump flat-out admitted he was doing with his declaration, telling a reporter on Friday in the White House Rose Garden:

“I didn’t need to do this. But I’d rather do it much faster.”

The problem with people like Limbaugh, Sean Hannity, and other right-wing Trump cheerleaders is that they have no credibility whatsoever because they change with the political winds. If a Democrat uses his or her executive power, they whine and say it’s a threat to the Constitution. Then a would-be dictator like Donald Trump comes along and they applaud when he tries to subvert the will of Congress and steal money that’s been allocated for other purposes so he can build a monument to his own hatred and xenophobia.

Not only is Rush Limbaugh a hypocrite, he’s also a traitor to the very principles he says he cherishes. No wonder almost no one with a brain takes him seriously.