The United States Blues
Home News Fox News Calls Out Kellyanne Conway For Not Being Able To Say... 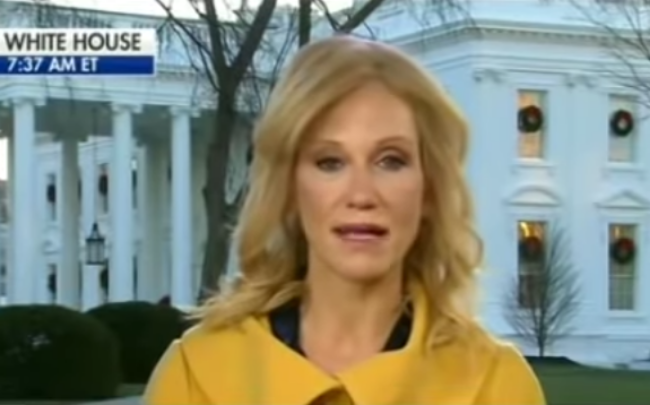 Hell briefly froze over on Wednesday morning when Fox & Friends hosts actually called out White House counselor Kellyanne Conway for insisting that President Donald Trump will find the money for his wall even if Congress doesn’t approve it.

In yet another morning temper tantrum, Trump demanded funding for his wall and threatened to get it “one way or another” as a government shutdown looms in the midst of the holiday season.

Trump also repeated his claim that Mexico is already paying for the wall because of the new NAFTA deal and that the military will build it.

Mexico is paying (indirectly) for the Wall through the new USMCA, the replacement for NAFTA! Far more money coming to the U.S. Because of the tremendous dangers at the Border, including large scale criminal and drug inflow, the United States Military will build the Wall!

In other words, Trump is saying Congress should take away those supposed savings from American businesses and workers and use it to build the wall, which most Americans oppose.

During an interview on Fox News, Conway insisted that Trump will get the money even if Congress doesn’t give it to him.

While she tried to defend Trump’s demand, host Brian Kilmeade pointed out that such funding won’t even make it through the House, which is under Republican control until this January.

“The president really has no leverage because the Republicans didn’t plan for a vote!” Kilmeade informed her. “The $5 billion couldn’t even get through the House!”

Conway repeated Trump’s claim that he’ll get the money another way.

“The president said there are other ways to get that money,” she replied. “And he said ‘one way or another,’ he’ll get the money for border security.”

But doing so would require Trump to circumvent Congress entirely. Trump has previously threatened to use defense spending to pay for the wall, which means shifting money earmarked for national defense and the military to the Department of Homeland Security, which violates the congressional power of the purse as spelled out by the Constitution. Only Congress can approve border wall funding. Trump can’t take money approved for other things to use on something else.

Ainsley Earhardt chimed in by telling Conway that the American people want to know how he’s getting the money if Mexico isn’t paying for it, and that making taxpayers fund it sounds like he’s “softening his stance.”

“People who voted for him, and want the wall, and went to the polls to vote for that wall, they want to know how he’s going to do this,” Earhardt said. “And they want to know why he seems to be softening his stance this morning.”

“The president is not softening his stance!” Conway whined. “He has a responsibility to keep the government moving forward.”

Conway went on to attack Republicans in Congress before blaming Democrats, who are not even in the majority in either house of Congress.

.@AinsleyEarhardt: People who voted for Trump & want the wall, they want to know how he’s going to do it. Why has he softened his stance?@KellyannePolls: ¯\_(ツ)_/¯ pic.twitter.com/HACYXsECkd

It sounds like even Fox News is beginning to question Trump’s wall funding.