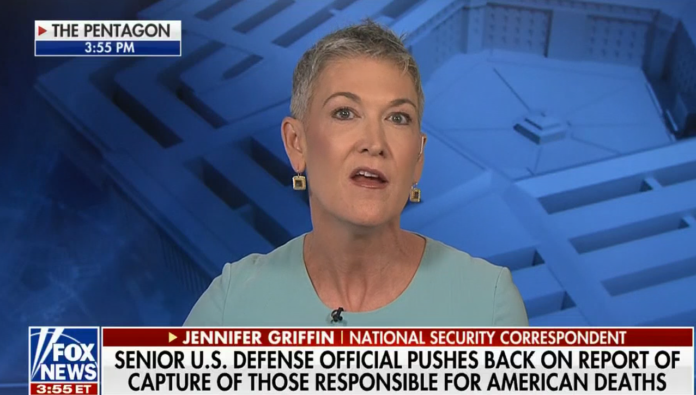 Fox News got busted spreading fake news on Tuesday for claiming in an article that five senior ISIS fighters involved in the killing of four Americans in a suicide attack earlier this year had been captured. And they actually issued a retraction but blamed other media outlets for their own screw-up.

The article in question has since been updated to reflect the new information after the Pentagon pushed back on the report, but it originally stated that the fighters “were responsible for American deaths.”

Forced to retract their earlier report, Fox News national security correspondent Jennifer Griffin corrected it on the air, but rather than take responsibility by admitting they screwed up, Fox News threw the Wall Street Journal and Reuters under the bus by portraying the errors as coming from reports by those outlets instead of themselves.

“Senior defense officials now tell us they are unsure whether, in fact, the five ISIS fighters caught by the Syrian Democratic Forces and interrogated by the Kurdish allies are in fact responsible for the death of four Americans in Syria as a result of that suicide bombing targeting U.S. forces in January,” Griffin said.

“A senior U.S. defense official says they are ‘unable to confirm at what level these fighters were involved if at all in the attack on the Americans,’ suggesting they may not be the main perpetrators of the attacks,” she continued.

“New information suggests these individuals are not as senior as first reported,” she concluded. “Originally, the reports appeared in the Wall Street Journal and in Reuters and appeared to come from a tweet that came from a Kurdish leader of the SDF that had talked about these five ISIS fighters and their involvement in that January 16th suicide bombing that killed four Americans. But we now have new information that senior defense officials are not sure how involved if at all they were.”

Again, Fox News made no mention of the fact that their own network reported that these five ISIS fighters “were responsible” for the attack, brushing aside that they peddled fake news to the families of the victims who are eager for justice for their loved ones, who were killed despite President Donald Trump and other members of his administration declaring ISIS defeated in the region, a claim that drew rebukes from military experts and lawmakers, including Senator Lindsey Graham (R-S.C.).

Fox News should be ashamed of themselves for making such claims and for failing to own up to their own errors. At least when other news outlets make mistakes, they apologize for them.