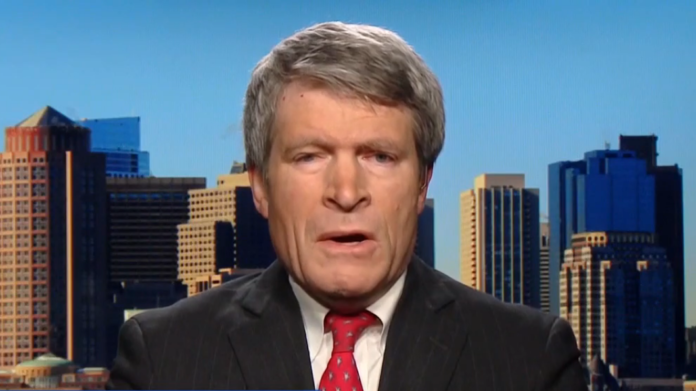 Richard Painter, who served as the ethics czar during the George W. Bush administration said Thursday that President Donald Trump may well be working for Russia to destabilize the United States.

During an appearance on MSNBC Thursday morning, Painter noted that the current situation with Trump is much more perilous than the threat posed by Richard Nixon in the 1970s:

“This is very dangerous for the United States of America. Unlike Watergate, this involves a foreign power that has apparently infiltrated our government through influencing an election. Then we have the financial relationships with the Trump Organization and perhaps members of Congress. Russia may very well have information on members of Congress that allows Russia to blackmail them.”

Painter added that he’s delighted the House Intelligence Committee, now under the leadership of Rep. Devin Nunes (D-CA), will be conducting real oversight and investigations of Trump:

“Finally, the House Intelligence Committee is going to be doing something. They’ve been sitting on their hands for two years harassing the FBI.”

Asked about Trump’s comments on Twitter Thursday morning in which he claimed Democrats were engaged in “presidential harassment,” Painter mocked Trump and said the current president may well be what’s known in the intelligence community as a “mole” i.e. a spy who manages to penetrate security defenses of a country from within:

“He’s been going after the press and immigrants and religious minorities, his own cabinet members, members of Congress. He’s flailing around here, but it’s quite obvious he’s in serious trouble. I don’t know if he’s a Russian mole or not, but he’s certainly acting like it.”

As Trump continues to insist he’s done nothing wrong, his words and actions certainly undercut such a claim of innocence. He has yet to criticize Russian President Vladimir Putin, recently had the Treasury Department lift economic sanctions on a Russian oligarch with close connections to the Kremlin, and made numerous military moves that are beneficial to Russia and detrimental to our NATO allies.

The only want to determine Trump’s guilt or innocence is to keep digging and investigating. Only then can we ever hope to find the truth.