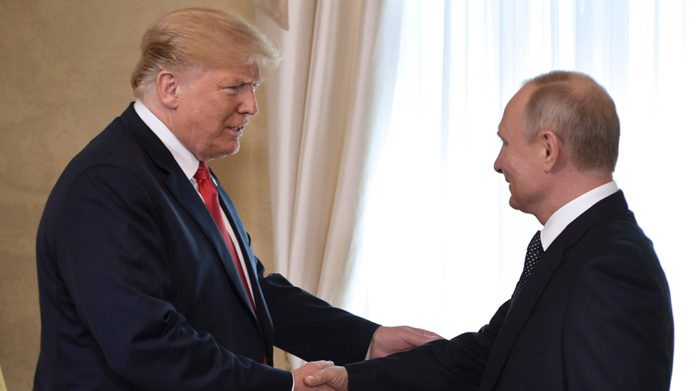 With the indictment and arrest of longtime Trump confidant Roger Stone last week, the Russia investigation moved closer to the White House and President Donald Trump. And now a member of the House Intelligence Committee is warning that it appears Trump is involved in more than just collusion with Russia during the 2016 election.

Rep. Jim Himes (D-CT) was a guest Monday on the MSNBC program “Morning Joe,” and said what we already know about the probe being conducted by Special Counsel Robert Mueller should concern every American:

“We’re way past collusion, right. If collusion is helping each other out, there was lots of helping each other out. The question is, was there coordination and quid pro quo? Is Michael Cohen or Roger Stone or anyone else, the president, on record as saying, ‘Hey, if we do this, we will get that?’ That’s when you move from collusion to criminal conspiracy. I think that’s the remaining shoe to drop out of the Mueller investigation.”

Indeed, it has long been speculated that perhaps Trump agreed to lift economic sanctions on Russia in exchange for their assistance in helping him win the election.

“Nobody knows what Bob Mueller has, but if, in fact, a conspiracy on the part of a presidential campaign to conspire to defraud the American people or defraud the government, that, believe me, is the closing act, the fourth movement in that symphony. I don’t think it gets revealed around a character like Roger Stone or Michael Cohen, that, that is the closing act of this whole thing.”

If Mueller is able to draw a line between Trump and Russia, that would indeed provide compelling evidence that this president is compromised by a hostile foreign nation and is a threat to the national security of the United States. Congress would have no choice but to begin impeachment proceedings.

The Mueller report may be released as soon as next month. We’ll all have to wait a while longer to see exactly what it contains.