The United States Blues
Home News Giuliani: Trump Should Be Allowed To ‘Correct’ The Mueller Report Before Release 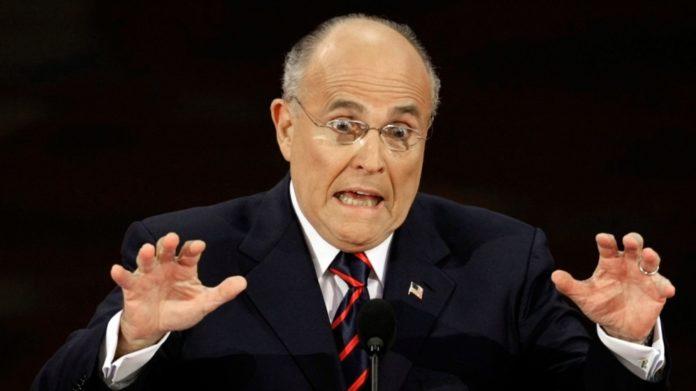 According to Rudy Giuliani, President Donald Trump should be allowed the opportunity to “correct” Special Counsel Robert Mueller’s written report before it is released to Congress or the American people.

In an interview he gave to The Hill Thursday evening, Giuliani also suggested that the president’s legal team has every right to review the Mueller report prior to it being released:

“As a matter of fairness, they should show it to you — so we can correct it if they’re wrong. They’re not God, after all. They could be wrong.”

Giuliani also tried to claim that Trump may have the right to claim executive privilege when it comes to portions of the Mueller report, telling The Hill:

“Of course we have to see [the report] before it goes to Congress. We have reserved executive privilege and we have a right to assert it. The only way we can assert it is if we see what is in the report.”

The former New York City mayor and federal prosecutor who serves as an attorney and spokesperson for Trump, was asked about the upcoming testimony from former Trump attorney and fixer Michael Cohen, who will testify before Congress on February 7:

“Big deal! I have no concerns about Cohen at all because I can prove with very little effort that he is a total, complete and absolute liar.”

When the interview turned to recent revelations that former Trump campaign manager Paul Manfort gave polling data to a Russian with extensive ties to Russian intelligence, Giuliani tried to downplay the matter:

“Should he have done it? No. But there’s nothing criminal about it.

“There is no legal protection of polling data. You can give it to anyone. Campaigns leak polling data all the time.”

However, if such data was given to a foreign country or foreign national intent on using it for the purpose of influencing an election, that would potentially constitute both fraud and a conspiracy to defraud the United States, according to legal scholars who have weighed in on Manafort’s actions during the 2016 presidential race.

And while Giuliani and Trump may think they have a right to see the Mueller report before anyone else and even keep portions of it out of public view, former Obama administration solicitor general Neal Katal said recently:

“He will lose to the public’s right to know.”

The Mueller report is expected as soon as February, and it could well wind up leading to the impeachment of Donald Trump.