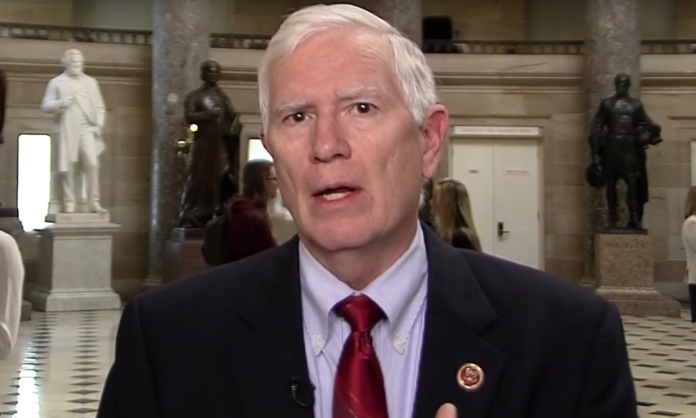 On the floor of the House of Representatives Monday, Rep. Mo Brooks (R-AL) quoted Adolf Hitler and launched a clearly anti-Semitic attack on Democrats and the media while offering his thoughts on the report from Special Counsel Robert Mueller.

“Brooks actually read from Hitler’s autobiography, Mein Kampf, about the Nazi leader’s characterization of ‘big lie’ propaganda that he said was used by his Jewish opponents. In Brooks’ scenario, it applies to Democrats and the media.

“Brooks launched the attack in the wake of findings by special counsel Robert Mueller, whose newly completed investigation has cleared the Trump campaign of collusion with Russian operatives but did not exonerate President Donald Trump of obstruction of justice. Brooks referred to Hitler as ‘another socialist and said Democrats and the press pushed the ‘big lie’ of Russian collusion.”

Holding forth on how he claimed Democrats and the press have attacked President Donald Trump, Brooks declared:

“In that vein, I quote from another socialist who mastered ‘big lie’ propaganda to a maximum, and deadly, effect.”

The Alabama Republican then read this passage from Mein Kampf:

“Quote: ‘In the big lie, there is always a certain force of credibility because the broad masses of a nation are always more easily corrupted in the deeper strata of their emotional nature … and thus in the primitive simplicity of their minds they more readily fall victims to the big lie than the small lie.'”

Later in the day, Brooks even retweeted coverage of his speech and uploaded it to his YouTube channel.

So let me get this straight. Hitler accused Jews of a Big Lie, blaming the loss of WWI on Erich Ludendorff. You’re accusing the Democrats of a similar Big Lie, accusing Trump of colluding with Russia?

So in this analogy, Mo Brooks is Hitler, and Dems are the Jews. Think about it

The Trump administration has accused Rep. Ilhan Omar (D-MN) of making anti-Semitic remarks and suggested she should resign from Congress. So where is their outrage when Brooks cites a direct quote from Hitler that was used to stir up hatred of Jews in Nazi Germany?

All you can hear are the crickets chirping over at 1600 Pennsylvania Avenue.