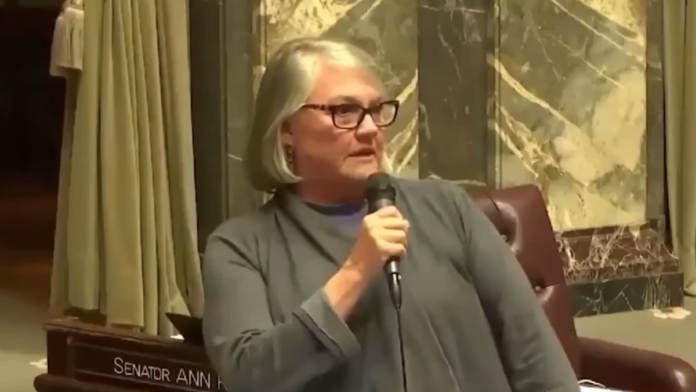 A GOP lawmaker in Washington State is under fire for remarks she made this week suggesting that nurses in rural hospitals don’t need protections in the workplace because they just sit around and “play cards” all day.

State Sen. Maureen Walsh made her comments during debate over a bill that would give mandatory rest breaks for nurses in the state. Walsh insisted on adding an amendment that would exempt small hospitals with 25 or fewer beds from the new rules Her reasoning? Walsh maintained that nurses in small hospitals don’t work as hard as nurses in larger facilities.

“If nurses get tired, let’s stop letting them do 12 hours shifts, let’s make them do 8-hour shifts. 12 hours, I know they want it but, then they come back and start talking out of both sides of their mouth and telling us how tired they are.

“I understand making sure that we have rest breaks and things like that. But, I also understand that we need to care for patients first and foremost. I would submit to you that those nurses probably do get breaks! They probably play cards for a considerable amount of the day!”

The Washington State Hospital Association had this to say about Walsh’s ignorant statements:

“No, senator, nurses are not sitting around playing cards. They are taking care of your neighbors, your family, your community. There is zero logic behind an amendment to the rest breaks bill that would cover nurses and patients in some hospitals, while leaving others without any protections.”

Walsh’s amendment was adopted and passed by the full state Senate. The state House also passed a similar bill, but without the Walsh amendment.

One wonders exactly what Senator Walsh does all day when she isn’t making ridiculous statements about a profession she knows next to nothing about. Does she play cards, or does she just try to think up new ways to screw over hardworking medical professionals?