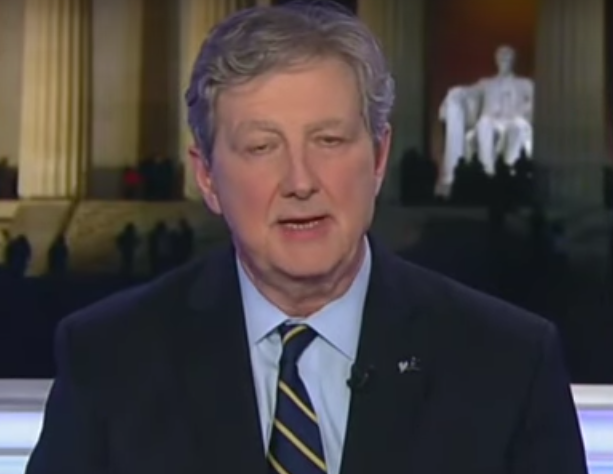 In the aftermath of House Democrats condemning President Donald Trump’s racist attack against four Democratic congresswomen of color, Senator John Kennedy (R-La.) launched his own vile attack against the women by calling them the “four horsemen of the apocalypse,” much to Trump’s delight.

The House passed a resolution formally condemning Trump’s racist remarks toward Reps. Alexandria Ocasio-Cortez (D-N.Y.), Ilhan Omar (D-Minn.), Rashida Tlaib (D-Mich.) and Ayanna Pressley (D-Mass.) in which he told them to go back where they came from.

The resolution passed and only four Republicans voted with Democrats in support.

Unfortunately, most Republicans have been defending Trump and have doubled down on his attacks with outbursts of their own that are just as offensive and ridiculous.

During an appearance on Fox News with racist host Tucker Carlson on Tuesday night, Kennedy told the four women to leave the country and claimed that they believe America is “evil” and that they are the “four horsemen of the apocalypse” before ending by calling them “wackjobs”.

Seriously, a sitting Senator attacked members of the House of Representatives this way.

Trump’s attack was racist, pure and simple. And we can tell by the fact that white nationalists are cheering in support of what he said.

And Trump certainly enjoyed hearing what Kennedy spouted because he directly quoted him on Twitter Wednesday morning.

…opinion, they’re Americans. Now I’m entitled to my opinion, & I just think they’re left wing cranks. They’re the reason there are directions on a shampoo bottle, & we should ignore them. The “squad” has moved the Democrat Party substantially LEFT, and…..

….they are destroying the Democrat Party. I’m appalled that so many of our Presidential candidates are falling all over themselves to try to agree with the four horsewomen of the apocalypse. I’m entitled to say that they’re Wack Jobs.” Louisiana Senator John Kennedy

Clearly, Kennedy is competing with Senator Lindsey Graham (R-S.C.) to be Trump’s favorite lackey without a spine.