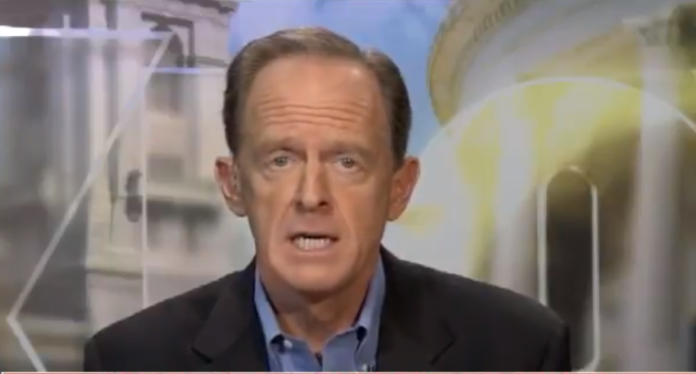 Appearing on Fox News Tuesday morning, Toomey was asked by host Sandra Smith if Republicans have any plans for legislation that would prevent the public from having access to gun magazines that hold up to 100 rounds of ammunition. The senator replied:

“My focus is on keeping guns out of the hands of people who should not have guns, people who have no legal right to a firearm. Guns that are described as assault weapons are almost invariably no more powerful than regular hunting rifles.”

That’s simply not true. A hunting rifle doesn’t hold a 100-shot magazine and is intended for the purpose of hunting. An assault rifle has only one purpose: Killing people.

“They are no more lethal. They are extremely popular, so to ban an extremely popular firearm, I’m not going to support that, that would be an infringement on the rights of law-abiding citizens.”

Really? It wasn’t an infringement of the rights of law-abiding citizens when we had a ban on those weapons between 1994 and 2004. There were numerous legal challenges to the ban, and they were all rejected by federal courts.

“If you confiscated my guns, no one would be any safer, and we should bear that in mind. What we have to focus on is keeping them out of the hands of the violent criminals, those who are mentally ill. Those are the people that are committing these massacres.”

Then perhaps it’s time to up the ante, Senator. Maybe we need legislation that says if you commit a crime with an assault rifle, it’s an automatic life sentence without the possibility of parole. Or, since the Trump administration is so fond of the death penalty, maybe we can execute anyone who illegally purchases, possesses, or commits a crime with an assault weapon. That might just get the message across that it’s not worth the penalty to have a weapon of war in your possession.

The real issue is that Senator Toomey has taken nearly $100,000 from pro-gun groups and is terrified of the NRA, like nearly every Republican. The solution to that problem is to vote them out of office. Every single politician who refuses to buck the NRA needs to be retired from office at the ballot box. Maybe then we can get some sensible gun control legislation in this country.