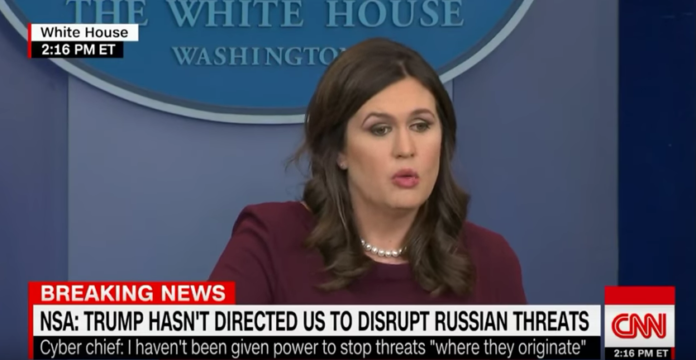 On Tuesday, National Security Agency and US Cyber Command head Navy Admiral Mike Rogers warned Congress that Russia is meddling with the 2018 midterms, but isn’t being given the authority to counter their operation against our democratic process.

“This threatens the foundations of democracy, making it difficult to craft common measures for countering Russia’s aggressive actions in its near-abroad and its repression at home.

They haven’t paid a price, at least, that’s sufficient to get them to change their behavior.”

When asked what the NSA is doing to stop Russia, Rogers said:

And that’s because Trump hasn’t given him the order to do so. Rogers continued:

“I need a policy decision that indicates there is specific direction to do that. The President ultimately would make this decision in accordance with a recommendation from the Secretary of Defense.”

So, when Huckabee Sanders took the podium during a White House briefing on the same day, ABC News reporter Jonathan Karl wanted to know what Trump is doing to prevent such attacks.

“We are focused in looking at a variety of different ways.”

But Karl pointed out that:

“Admiral Rogers is the one that would have the agency that could actually go and confront the Russian intrusion at the source. …All he needs is a presidential directive, the authority.”

“I disagree with the premise of the question. It’s not just one individual.”

“He’s in charge of Cyber Command! Why not give him the authority?”

Rather than answer a simple question, Huckabee Sanders desperately declared that Trump has been tougher on Russia than Obama and proceeded to blame Obama for the whole mess.

“This president has been much tougher on Russia than his predecessor. Let’s not forget that this happened under Obama. This didn’t happen under President Trump. If you want to blame somebody on past problems then you need to look at the Obama administration.”

Trump and his cronies blaming Obama has been the standard line of attack in recent weeks to distract from the fact that Trump has done nothing to prevent Russia from meddling again and that Trump’s campaign may have colluded with the Russians to sway the election.

The problem is that Obama tried to warn the public about Russian interference in 2016, but was denied by Republican leaders when he sought a bipartisan public announcement. Obama also retaliated against Russia by slapping sanctions against them, something Trump has refused to do all while insisting that he believes Russian President Vladimir Putin’s denial of meddling.

The fact is that Trump is president, not Obama. He can blame Obama all he wants. If Russia meddles with the 2018 Election and subverts our democratic process again, Trump will be to blame. He has had over a year to do something about Russia but he would rather pretend that the interference never happened at all. It’s a reckless position that endangers our country and Constitution.

Trump could easily start by enforcing the sanctions Congress passed last year. Trump could also give Rogers the authority to counter and actively fight Russia’s meddling efforts. After all, Rogers is the head of the agency that is best equipped to deal with cyberattacks.

Either Trump starts taking the Russia threat seriously or it’s going to look like he wants Russia to help him and Republicans in November. Letting an enemy state interfere with our democratic process for political gain would be a violation of the oath of office Trump took and it would be treasonous. It would also be clear grounds for impeachment. Its time for Trump to stop being Putin’s puppet and do his damn job.