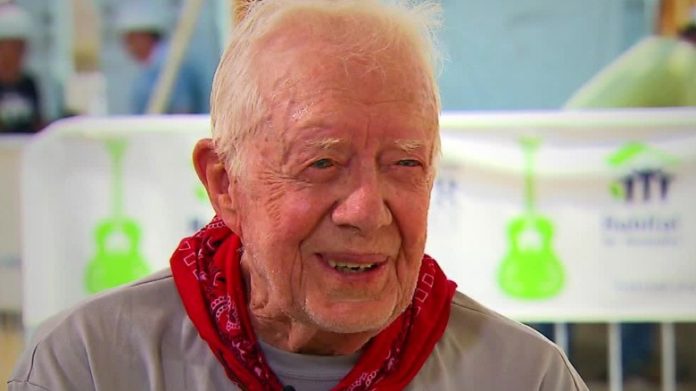 Former President Jimmy Carter said Tuesday that President Donald Trump needs to stop with his endless stonewalling and cooperate with the impeachment inquiry.

During an interview with Andrea Mitchell on MSNBC, Carter offered Trump some free advice:

“My advice to him would be to tell the truth, I think, for a change. And also to cut back on his Twitter feeds and give the House of Representatives and also the Senate, and I would say, the general public, the evidence that — that we need to form a case, either for or against him.”

Asked if the impeachment inquiry was a good thing, Carter replied:

“I think it still remains to be seen. I think we still need to ascertain the facts from a very thorough investigation.”

The former president also said that while some have predicted that the GOP-controlled Senate would never convict Trump, it’s not clear that is a foregone conclusion:

“If facts reveal an increasing number of things that he has actually done — then of course impeachment is possible, and removal from office is possible.”

Carter noted that the administration’s refusal to allow those with knowledge of what happened in Trump’s infamous call with Ukrainian leader Volodymyr Zelensky to testify is highly suspicious:

President Carter and former First Lady Rosalynn Carter are in Nashville this week to take part in an annual event with Habitat for Humanity, which helps build homes for needy Americans. Asked about his enduring commitment to the cause of providing housing for the less fortunate, Carter remarked:

“I think this is the best way that I could put my Christian faith into actual practice. You know, Jesus Christ was a carpenter, as a matter of fact. And I’m sure he swung a hammer a lot. So, you know, when we have a Christian faith, we want to try to pick out some way for wealthy people and folks that have everything, like I do, to reach out and help others. And this is an easy way to do it.”