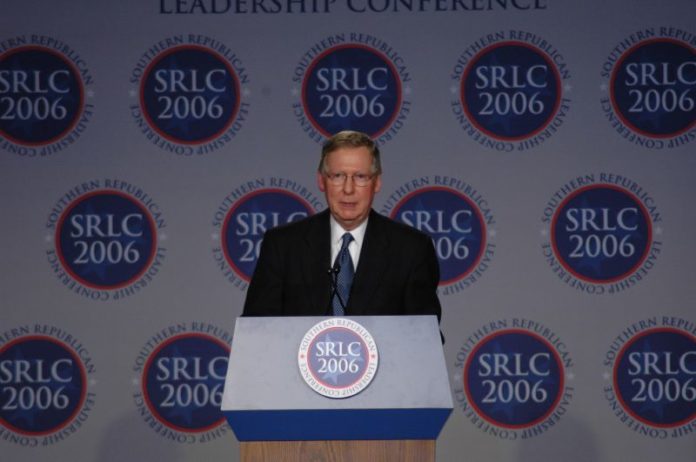 Trump’s government shutdown has now lasted 34 days and he refuses to end it because he is demanding billions of dollars to build a useless wall on the southern border. Meanwhile, the House has passed several bills to re-open the government, but McConnell refuses to bring any of them up for a vote because he knows they will have enough Republican support to pass. After all, he voted for the same package of bills in December.

But McConnell is going bring up a bill featuring Trump’s fake “compromise” offer to Democrats, which is three temporary years of relief for DACA recipients and refugees under programs he initially ended and could easily end again if he is re-elected in exchange for a permanent wall. In the end, Democrats would get nothing. That’s not a compromise at all.

On Wednesday, McConnell attacked Democrats for not taking the offer.

Enough political spite. Enough showboating for “the Resistance.” The President has produced a fair compromise that pairs full-year government funding with immigration policy priorities from both sides. It’s time to make a deal.

This is particularly hypocritical of McConnell, who spent eight years obstructing former President Barack Obama and even refused to confirm his Supreme Court nominee for a year out of spite so that Trump could fill the seat himself, something Scarborough reminded McConnell in response.

Merrick Garland. Now.
Merrick Garland. Forever.
You killed the albatross.
Wear it around your neck and keep lectures on obstruction and showboating to yourself. https://t.co/TVU9vRMbf6

Or we can just wait for the day your soulless body crumbles into ash on the senate floor.

Mitch, you already voted on the budget without the wall in December. We can see right though you.

Supreme Court Justice Merrick Garland can’t be reached for comment. You destroyed comity and explicitly stated GOP would thwart Clinton’s agenda had she won in 2016.

The GOP has nothing but obstruction and regressive policies that subvert functioning govt.

“One of my proudest moments was when I told Obama, ‘You will not fill this Supreme Court vacancy.'”

Come 2020, I will make it my priority to raise money for your opponent.

How dare you? The audacity to emerge from your shell and lecture us about governance is astounding. Your leadership of the Senate will live in infamy for a hundred years. You’ve shown no respect for institutional norms, and no deference to the Constitution. Enough. Shame on you.

“Our goal is to make Barack Obama a one-term president.”

Besides, if you wanted the wall, why didn’t the GOP fund it when you controlled both houses?

This is the #TrumpShutDown. He wants compromise? Offer PERMANENT #DACA fixes.

Oh shut the fuck up. This whole thing is your fault. What kind of fucking “leader” is too much of a pussy to bring something up for a vote? Don’t ever lecture anyone ever again, doucheturtle.

Clearly, McConnell is the problem in Washington DC. After years of obstruction and political spite against Obama, he is now pretending that he did nothing of the sort while whining about Democrats not bowing down to Trump’s demands like good little subjects. He should be ashamed of himself, but he doesn’t possess the ability to do so. And that’s why the only solution is to oust him from office along with Trump in 2020.