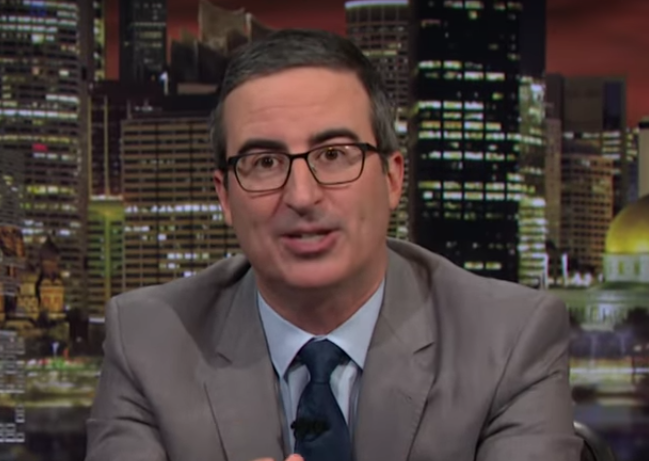 “Last Week Tonight” host John Oliver took aim at Fox News for constantly letting President Donald Trump off the hook no matter what he has been accused of and no matter what the evidence is against him.

As we all know, Attorney General William Barr wrote a four-page summary of the Mueller report claiming that it says Trump did not commit conspiracy, but it also “does not exonerate him” of obstruction of justice.

But Trump’s supporters, including Fox News, have been insisting that Trump has been completely cleared even though that’s not what the summary says.

“The OJ Simson murders were not reported as ‘Affordable House Becomes Available In Brentwood,’” Oliver said. “There’s something pretty big missing from that headline. And yet, all week long, the president’s supporters took that one piece of good news and rounded it up to two.”

Indeed, Trump’s allies have gone so far as to pretend there’s no evidence Trump committed a crime at all. The problem is that Barr has refused to release the full Mueller report to prove it.

“Normally this is where we’d do a deep dive into the details of the report, explaining all of the possible implications,” Oliver continued. “The problem is: we still haven’t seen it. Congress hasn’t seen it. Even the president hasn’t seen it. We only know what Trump’s own attorney general thinks we need to know. A man who, unsolicited, before he got his current job, sent top DOJ officials a memo ruling out obstruction of justice charges against the president. So, there are plenty of qualifiers and questions left here.”

He’s right. Barr declared Trump didn’t obstruct justice long before Trump appointed him, which means he was clearly biased against the Russia investigation and Mueller. And that served as an audition for the job he would be given.

Oliver concluded by noting that if the truth about Trump and his 2016 campaign rolled out as a single headline, Americans would be more shocked and outraged.

“Try and imagine that it all came out at once and that a single headline said: Russia confirmed to have interfered in election and president’s campaign manager, lawyer and multiple advisers convicted of crimes and Trump and his team lied about business with Russia, contact with Russians and Trump may have committed campaign finance violations to cover up affair with adult film star shortly after his wife gave birth and which he also attempted to continue but ended up sitting next to the adult film star in a hotel room and watching ‘Shark Week.’”

It’s time for Barr to release the report. Then we’ll see if Fox News still wants to say Trump is totally innocent.