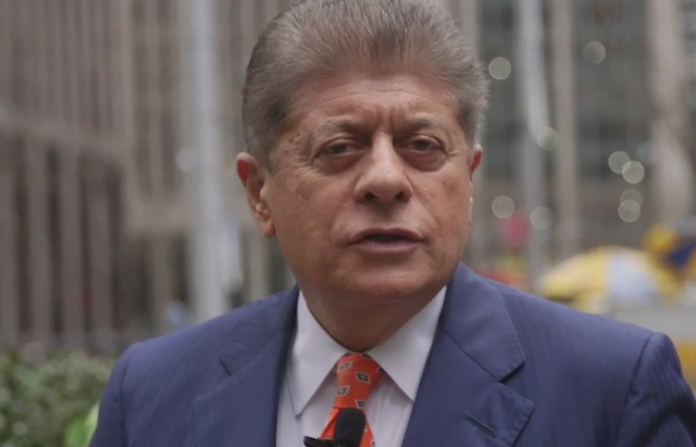 Even Fox News legal analyst Judge Andrew Napolitano admits that the Mueller report is so damning to President Donald Trump that it could be enough to prosecute him.

Attorney General Bill Barr portrayed the Mueller report as a 400 page document that totally exonerates Trump, but the report is far different from Barr’s spin because it lists several instances of obstruction that Trump committed to undermine the investigation.

Barr’s effort to excuse Trump’s behavior because he was frustrated and paranoid have been rejected by legal experts.

Basically, as people read the actual report, they discover that Barr’s conclusion is a sham to protect Trump, who most certainly engaged in the kind of behavior that would land anyone else in jail.

On Friday, Napolitano reacted to the report during a segment of Fox News’ digital programming.

“There’s a lot in there that should be troubling to Americans about the president of the United States,” he began.

Napolitano said that while there were communications and cooperation with the Russians by Trump officials during the 2016 campaign, Mueller couldn’t nail Trump for conspiracy because there was no agreement or deal made between the Trump campaign and the Russians to collude.

As for obstruction, Napolitano continued, “the president is not exactly cleared because the report lists eleven instances in which the president attempted to interfere with the investigation of his own campaign.”

Incredibly, the Fox legal expert said Trump could even be prosecuted because of the content of the report.

“Depending on how you look at them, there might be enough to prosecute, but the attorney general has decided it’s not enough to prosecute,” Napolitano said. “But it did show a venal, amoral, deceptive Donald Trump, instructing his aides to lie and willing to help them do so. That’s not good in the president of the United States.”

Cohen served as Trump’s personal lawyer and fixer for many years and he recently testified against Trump in Congress and to federal prosecutors.

Napolitano concluded by stating that this is just “the end of the beginning” of the long road of investigations by state and federal prosecutors and by Congress, which now has the opportunity to judge if Trump should be impeached based on the obstruction findings.

Here’s the video via Fox News: