The United States Blues
Home Elections Kellyanne Conway Gets Called Out When She Starts Telling Lies About James... 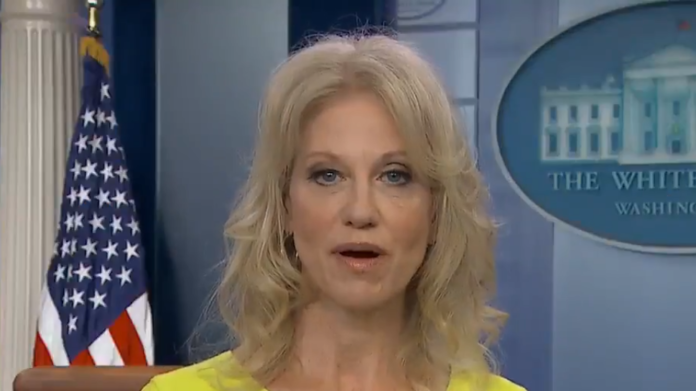 Hours after the ABC News interview with former FBI Director James Comey on Sunday evening, the White House was in full spin mode, sending out top administration spokespeople to try and counter the claims made by Comey.

Senior White House counselor Kellyanne Conway made an appearance on Good Morning America Monday morning and immediately began trying to provide “alternative facts” about Comey instead of offering legitimate counter arguments to the allegations that President Donald Trump may indeed be compromised by the Russians.

Conway began by rehashing a talking point that has often been used by Trump: That Comey leaked information regarding the FBI investigation into Hillary Clinton’s emails:

What Conway neglected to mention, however, is that a Republican — former Utah GOP Congressman Jason Chaffetz, to be exact —  was the first to disclose that information to the public.

“[Does] the president have any evidence to back up his side of the story?”

Instead of replying, Conway attempted to pivot, stating that Comey admitted when he testified before a Senate committee that Trump had never asked him to end the FBI investigation into disgraced National Security Adviser Michael Flynn.

Stephanopoulos, clearly irritated with Conway, called her out:

“Kellyanne, I have to stop you there. Because that’s not correct either.”

It certainly isn’t correct. The facts are: Comey was never asked by senators if Trump asked him to end the Flynn investigation, so there’s no he could have said what Conway clearly lied about.

Trying to justify her attacks on Comey, Conway said the former FBI Director “loved being in the proximity of power.”

Yeah, as if you don’t love it, too, Kellyanne.

The administration and their GOP allies, along with the stooges at Fox News, know that Comey’s book is damaging to the president. Under siege on multiple fronts, the White House is now trying to rewrite history. But their efforts are failing, and so is the man they’re so desperate to protect.

FULL INTERVIEW: “I spoke to the President before the interview…” Counselor to the President Kellyanne Conway one-on-one with @GStephanopoulos: https://t.co/hJAiOh1z0C pic.twitter.com/kFt1jNCwB0