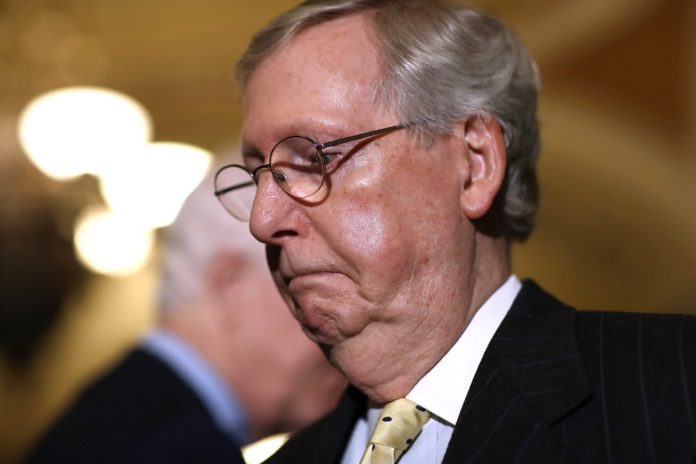 If you were wondering just how bad things are going for Senate Majority Leader Mitch McConnell (R-KY), who’s running for reelection next year, consider this: Coal miners in his state are now endorsing his Democratic opponent, Amy McGrath, and even making ads for McGrath in which they suggest that McConnell has abandoned them and his home state.

McConnell and President Donald Trump have been promising to revive the dying coal industry, but all they’ve accomplished is spouting rhetoric while they neglect the health benefits and pensions of those who have worked in the mines for decades.

And that’s where the McGrath ad comes into play, with coal miner Jimmy Moore saying he and some of his co-workers made a trip to Washington to meet with McConnell about legislation to fully fund the pensions and health care coverage for those with black lung disease. But McConnell barely even acknowledged them when they arrived at his office:

“It was a 10-hour bus ride. We were coal miners with black lung disease going to see our senator, Mitch McConnell, to try and save our disability benefits. Ten hours on a bus and we got to see him for all of one minute.”

The miner goes on to explain that black lung is taking its toll on his family, and he’s afraid he’s going to lose his son to the disease, but McConnell only cares about protecting the big coal companies:

“My stepfather and grandfather died of black lung. Now I could lose my son. Mitch McConnell let the coal companies walk away from us, and then after one minute, he did too.”

In a new campaign ad, Kentucky senate candidate Amy McGrath charges that “Mitch McConnell left our coal miners behind years ago. The question for anyone in Congress is, which side are you on?” pic.twitter.com/88q0sZZnKN

It’s far too early to know if McConnell will actually lose his Senate seat, but based on what many back in Kentucky are saying about him, he certainly deserves to. Mitch McConnell has forgotten about his constituents, and some of them are now saying they’re sick and tired of his broken promises.