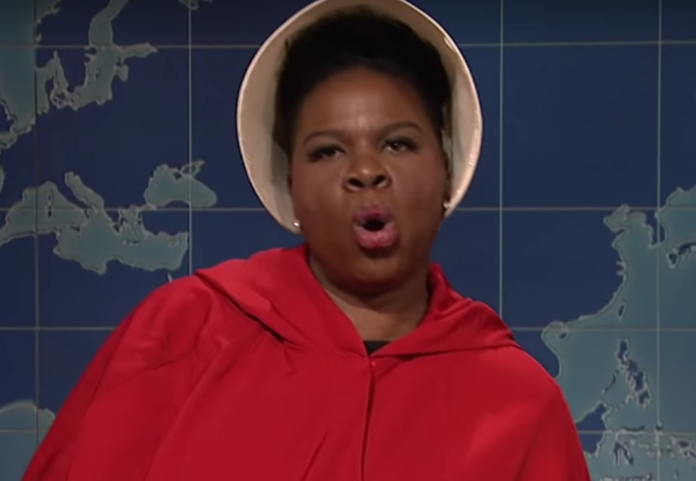 The new law passed earlier this week banned all abortions, even in cases of rape and incest, and now stands as the most restrictive abortion law in the nation, which conservatives are hoping will result in the Supreme Court striking down Roe v. Wade, which has been in effect since 1973.

Outrage against the new law has been fierce as even Republicans are warning that Alabama’s actions will result in women angrily going to the polls in 2020 to vote against them.

During the “Weekend Update” segment on “Saturday Night Live,” Jones appeared wearing a “Handmaid’s Tale” costume, which women have been wearing to protest the oppression of women. In that show, which portrays a totalitarian society in the United States, women are treated as property of the state and are forcibly impregnated and must give birth against their will.

“This is how it starts,” Jones said of the new law. “I’m out living my life, and then I see on the news a bunch of states are trying to ban abortion and tell me what I can and can’t do with my body. The next thing you know, I’m at Starbucks and they won’t take my credit card because I’m a woman, instead of the regular reason, which is I don’t have no money on it.”

She then showed an image of all the Republican men in Alabama who voted for the legislation.

“This looks like the mugshots of everyone arrested at a massage parlor,” Jones quipped. “And if any of them had lips, I would tell them to kiss my entire a**. You can’t control women because, I don’t know if y’all heard, but women are the same as humans.

“When women have a choice, women have freedom,” she continued. “This really is a war on women.”

She then yelled “Dracarys!”– which is a Game of Thrones term uttered by Daenerys Targaryen commanding her dragons to burn a city down. Clearly, Alabama Republicans had better be prepared because women are coming for them.