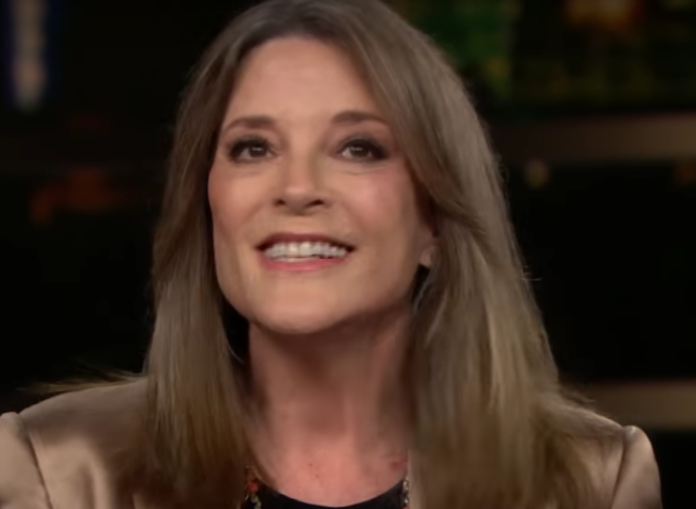 Whether you think she is irrelevant or not, Democratic presidential candidate Marianne Williamson has made some good points during her campaign, and she made another good point during an appearance on “Real Time” with Bill Maher about President Donald Trump on Friday.

Fresh off a strong debate performance earlier this week that has raised her profile, Williamson appeared on the HBO program, where she sat across the table from conservative Trump defender Buck Sexton.

Sexton attempted to defend Trump’s racist attack on Baltimore, only for Maher to jump in and point out that Trump never attacks predominantly white red states the way he attacks cities with majority black populations.

Using West Virginia as an example, Maher noted that it ranks at or near the very bottom in infrastructure, education, and healthcare all while Trump claims the state is “doing well.”

Sexton ignored those facts and claimed that Trump is trying to help West Virginia combat the opioid epidemic there.

Seeing an opening, Marianne Williamson responded perfectly to shut him down.

“If the president really wanted to help with the opioid addiction, he would not be proposing cuts to the FDA, cuts to the National Institutes of Health and cuts to the Centers for Disease Control,” she said to applause. “This man’s corporatist view has nothing to do with helping the people of the United States.”

She made a great point. All Trump has really done so far is throw a fractional amount of money at the issue. Even more useless is his decision to put Kellyanne Conway in charge of the effort to combat the epidemic. But he has also proposed spending cuts that would make the crisis worse, not just cuts to the institutions Williamson mentioned, but to programs such as Medicaid that pays for a quarter of addiction treatment in the United States, especially for West Virginians.

Trump’s government also saw fit to grant a patent for a drug that reduces opioid addiction to the very pharmaceutical company, Purdue, that makes OxyContin, the drug people are becoming addicted to in the first place.

The patent, is for a new and faster-acting form of buprenorphine. Buprenorphine controls drug cravings and is often given as a substitute to people hooked on heroin or opioid painkillers such as OxyContin.

Buprenorphine is currently prescribed in tablets or fast-dissolving strips. The patent is for a “wafer” of buprenorphine that would dissolve in just a few seconds.

“While opioids have always been known to be useful in pain treatment, they also display an addictive potential,” the patent states. “Thus, if opioids are taken by healthy human subjects with a drug-seeking behaviour they may lead to psychological as well as physical dependence.”

Now Purdue and the Sackler family that owns it has a very major conflict of interest. They can create a profit cycle by getting people addicted to their drug and then selling them a drug to cure that addiction, only to get them addicted again. Their bottom line demands that people get addicted to their drug, which is why the company is the subject of several lawsuits. If Trump actually cared about dealing with the crisis, his regulators would be coming down hard on opioid producers and would bar Purdue from owning the patent to the anti-addiction drug. At the very least, the government could mandate that the drug be free of charge.

Marianne Williamson is probably not going to win the Democratic nomination, but even she would be a better option than Trump. The Democratic debates hardly touched upon the crisis, but she sure shined a light on it last night and smacked down a Trump defender in the process.