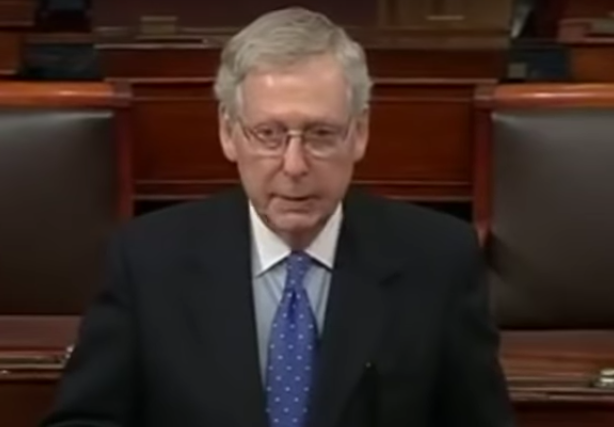 Senate Majority Leader Mitch McConnell (R-Ky.) whined on the Senate floor Monday about being slammed by Democrats and the media for blocking election security legislation that would help stop Russia from meddling in 2020.

Senate Democrats have offered two bills to prevent such interference, one that requires paper ballots to vote, and one that would require any political candidate and their families to report offers of assistance from foreign governments.

But McConnell blocked them both even though Special Counsel Robert Mueller warned during his congressional testimony that Russia is actively continuing to attack the United States election system.

And just this week, President Donald Trump replaced Director of National Intelligence Dan Coats, who has admitted that Russia is attacking us and has worked to prevent it, with a House Republican who denies Russia is a threat.

For refusing to protect American democracy, McConnell has been dubbed “Moscow Mitch” for ignoring Russian interference because he wants them to help Trump get re-elected.

Rather than just pass the bills to prove his critics wrong, McConnell lashed out at them by accusing them of “modern day McCarthyism,” only to go on to blame former President Obama for the 2016 interference.

“I was called unpatriotic, un-American and essentially treasonous by a couple of left-wing pundits on the basis of bold-faced lies,” McConnell whined. “I was accused of aiding and abetting the very man I’ve singled out as an adversary and opposed for nearly 20 years, Vladimir Putin.”

Except that if McConnell really “championed” bills to defend democracy, he would have allowed these bills to come for a vote instead of killing them all by himself.

“These theatrical requests happen all the time here on the Senate,” McConnell said. “I promise that nobody involved, including my friend the Democratic Leader who made the request, actually thought he’d get a Republican Senate to instantly, unanimously pass a bill that got one Republican vote over in the House. It doesn’t make Republicans traitors or un-American. It makes us policymakers with a different opinion.”

Here’s Mitch McConnell using “modern day McCarthyism” and complaining about alleged liberal efforts to “gaslight” about his record on Russia in the same video clip pic.twitter.com/QSueNwKauG

No, it definitely makes Republicans traitors. Because while they are blocking bills that any Senate in the past would have passed unanimously, McConnell is content with allowing Russia to continue attacking our elections as long as they help Republicans win. Americans should be horrified.