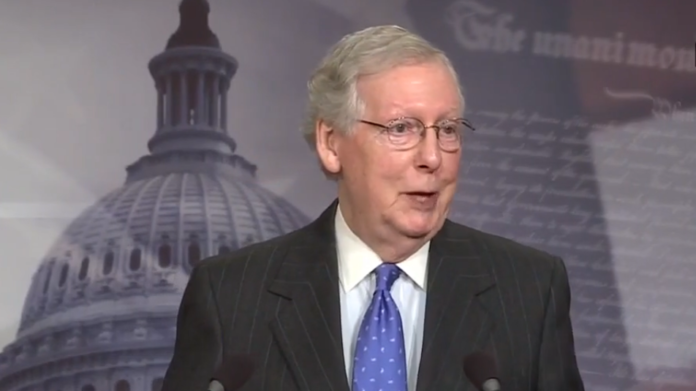 Now that Democrats control the U.S. House of Representatives, there will finally be much-needed Congressional oversight of President Donald Trump, who has skirted by without having to answer for his actions over the past two years.

But according to Senate Majority Leader Mitch McConnell (R-KY), such oversight is nothing more than “presidential harassment.”

During a post-election press conference Wednesday morning, McConnell — who saw Republicans gain seats in the upper chamber of Congress — was asked by a reporter:

“Is there anything the Senate Republicans could or would do to help President Trump in the event that Democrats in the House attempt to seize his tax returns.”

Rather than reply directly to the question, McConnell smirked and replied:

That response led another reporter to inquire:

“Are you recommending that for House Democrats, that oversight that they have said they’re going to do might backfire on them?”

“They’re not interested in my recommendations. I’m just making a historical observation that the business of presidential harassment, which we were deeply engaged in in the late 90s improved the president’s approval rating and tanked ours.”

Since when is Congressional oversight — a key component of the checks and balances set up by the Founding Fathers in the Constitution — harassment? Has McConnell forgotten that Clinton’s approval rating went up when he was impeached largely because most Americans didn’t think his personal life was anyone’s business?

Donald Trump may have conspired with Russia to win the 2016 election. He may also be profiting from his time in office even though that’s prohibited under the law. And he may have obstructed justice on numerous occasions. Most Americans want to see what evidence Robert Mueller has before they’re willing to give Trump a pass the way McConnell and his fellow GOP lemmings are.