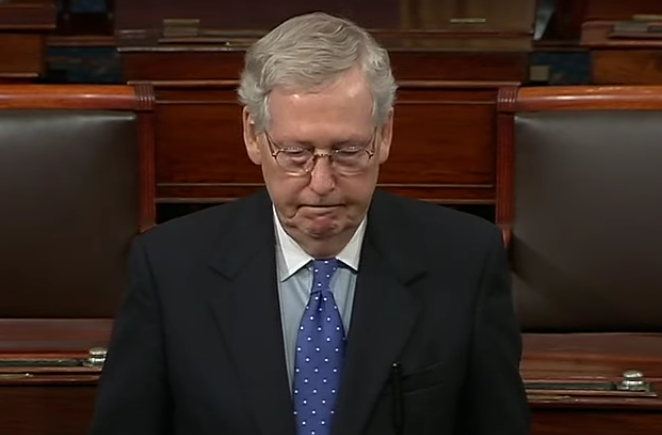 Senate Majority Leader Mitch McConnell (R-Ky.) took to the Senate floor on Tuesday to whine about the Mueller report and had the audacity to complain about Democrats conducting oversight and actually blamed former President Obama for Russian meddling during the 2016 Election.

Attorney General Bill Barr has been under fire for weeks for downplaying the report, which is damning to President Donald Trump because the probe found evidence of collusion, though not a smoking gun to bring criminal charges, and at least ten instances of obstruction of justice.

Democrats are rightfully outraged by Barr’s portrayal of the report, and many former federal prosecutors agree that Barr is protecting Trump because anyone else would have been indicted by now based on what the report says.

McConnell began his diatribe by demanding Democrats stand down and accused them of helping Vladimir Putin weaken America even though Trump has never confronted Putin for election interference and crafts policies that benefit Russia. And let’s not forget that McConnell allowed sanctions to be dropped against Russian oligarchs close to Putin.

“With an exhaustive investigation complete, would the country finally unify to confront the real challenges before us?” McConnell said. “Would we finally be able to move on from partisan paralysis and breathless conspiracy theorizing? Or would we remain consumed by unhinged partisanship, and keep dividing ourselves to the point that Putin and his agents need only stand on the sidelines and watch as their job is done for them. Regrettably, I think the answer is obvious.”

He then blamed Obama for the interference.

“I think many of us now see that President Obama’s approach to Russia could have used some more of the 1980’s, more Ronald Reagan and less Jimmy Carter,” McConnell said. “Maybe stronger leadership would have left the Kremlin less emboldened. Maybe tampering with our democracy wouldn’t have seemed so very tempting. Instead the previous administration sent the Kremlin the signal they could get away with almost anything, almost anything. So is it surprising that we got the brazen interference detailed in special counsel Mueller’s report? A concerted effort to divide Americans through social media campaigns, hacking into the email accounts and networks of the Clinton campaign and the Democratic Party. Thanks to the investigation, we know more about these tactics.”

The problem for McConnell is that Obama sought him out to release a joint condemnation of Russian interference during the election and McConnell refused, instead threatening to accuse Obama of trying to hurt Trump’s campaign if he released any such warning to the American public about the meddling.

Obama also slapped sanctions against Russia and repeatedly warned Putin to stop. But without Republican support, he was powerless to do much else.

As for the Mueller report, Barr lied about it and has acted like Trump’s defense lawyer instead of the chief law enforcement officer for our country. He has disgraced the office he holds and together with Trump is opening the door for Russia to meddle in 2020. That’s why Democrats are demanding answers by issuing subpoenas for evidence and witness testimony, including from Mueller himself. McConnell is desperate to move on from the Mueller report, but it’s not over and it’s not going to be over until the American people get the answers they deserve.