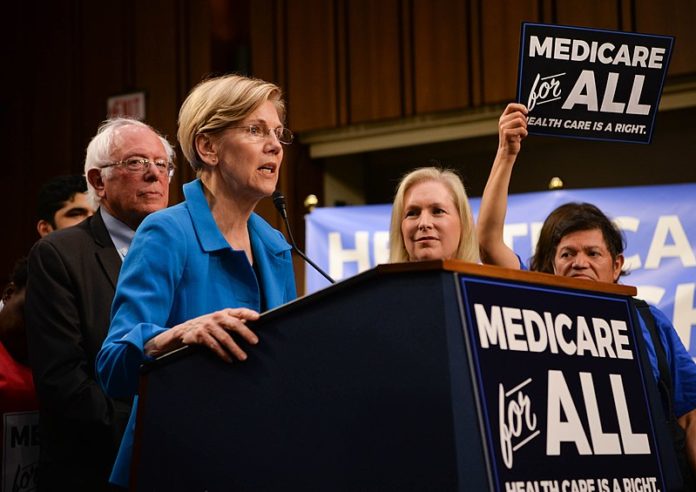 A universal healthcare proposal known as Medicare for All achieved a major milestone this week by securing support from a majority of House Democrats.

Americans need and want universal healthcare. Medicare for all is, by far, one of the most popular policies in the polls right now as numbers are regularly over 50 percent, with some as high as 70 percent.

And that makes sense. After all, the American people have sat and watched as developed nations around the world enjoy less expensive and better quality healthcare while we have to deal with greedy insurance companies and healthcare executives that make Americans choose between saving their lives or going bankrupt.

As Democratic presidential candidates spar over Medicare for All, with Senators Bernie Sanders (D-Vt.) and Elizabeth Warren (D-Mass.) having the best such plans of any others, a similar plan introduced in the House by Rep. Pramila Jayapal (D-Wash.) has gained enough steam that it now has majority support among House Democrats, demonstrating a tidal shift in the debate.

BIG NEWS: Medicare for All is now the official Democratic Party position in the U.S. House, as the legislation now has 118 sponsors — an official majority of the House Democratic Caucus. This is a huge landmark for @BernieSanders & @PramilaJayapal. https://t.co/XFDogZQM1z

But there is still much work to be done with the party. First and foremost, as Jayapal wrote in an op-ed, is for Democrats to stop attacking Medicare for All and for them to stop offering subpar plans.

“As the debates continue, I hope that my fellow Democrats will take a good look at our bill and get the facts right,” Jayapal wrote. “The Medicare for All movement has overwhelming public support, unprecedented grassroots organization, and a serious plan that is ready to change our healthcare system right now.”

She went on to slam fake Medicare for All plans in which private insurance companies still play a major role and even blasted former Vice-President Joe Biden’s offer of adding a public option, pointing out that it would “still leave more than 10 million people without coverage while keeping in place a costly private-insurance middleman that eats up 25 to 30 percent in administrative waste and profits.”

“If we want to achieve true universal healthcare while containing costs, Medicare for All is the only answer,” she concluded.

Healthcare should not be just for a privileged few. It’s the right of every human being. Thousands of Americans die every year from lack of proper healthcare because they simply can’t afford the skyrocketing prices. When an American in Taiwan can come out of an emergency room with a bill of only $80 compared to the thousands we have to pay just for walking through the door in the United States, that’s when you know we are getting screwed and need to institute universal healthcare.