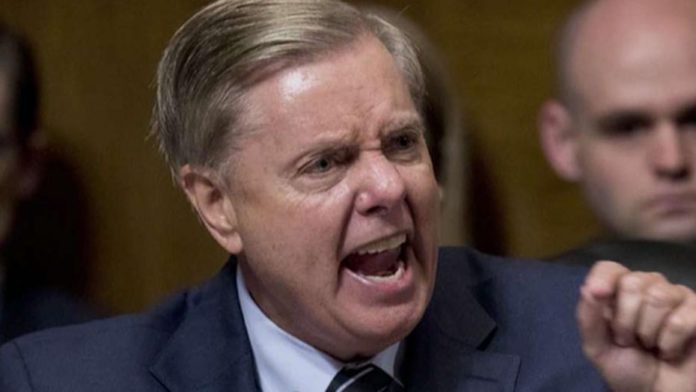 Senator Lindsey Graham (R-SC) is now on a par with Senate Majority Leader Mitch McConnell (R-KY), though the honor is dubious at best.

You may recall that McConnell got dubbed “Moscow Mitch” by MSNBC host Joe Scarborough due to his repeated refusal to allow election-security legislation to come to the floor of the Senate for a vote. That led McConnell to suggest that anyone who called him that was engaging in “modern-day McCarthyism.”

McConnell’s new nickname even led to a #MoscowMitch hashtag on Twitter, and it quickly became on of the most used on the social media platform.

Now, however, Graham has his own viral hashtag, according to HuffPost:

The #LeningradLindsey hashtag exploded to life on Twitter late Thursday after Sen. Lindsey Graham (R-S.C.) helped push a controversial bill aimed at making it harder for migrants to apply for asylum on the U.S.-Mexico border through the Senate Judiciary Committee.

Democrats on the committee accused Graham, the chairman, of breaking the rules with the way he forced through the partisan bill, titled the Secure and Protect Act of 2019. The legislation is reportedly not expected to be passed by the full Senate.

That was all it took for Twitter users to begin using the new hashtag until it spread like  digital wildfire:

I love that #MoscowMitch and #LeningradLindsey are now things. Trending. Let them know how you feel.

Lindsey Graham has always been a shitty human being. Nothing “changed”; most just chose to ignore how shitty he was when he was palling around with John McCain.#LeningradLindsey

I just love this day. pic.twitter.com/yCYLwP626b

Having been born in Leningrad, I find #LeningradLindsey both deeply offensive and absolutely spot on.

Hey, #LeningradLindsey, who put you up to pushing that bill?

And why is that?

Now all we need to find is a perfect Russia hashtag for President Donald Trump. Twitter, get to work!