The United States Blues
Home News Michelle Obama inspires at the Grammys as the crowd goes crazy for... 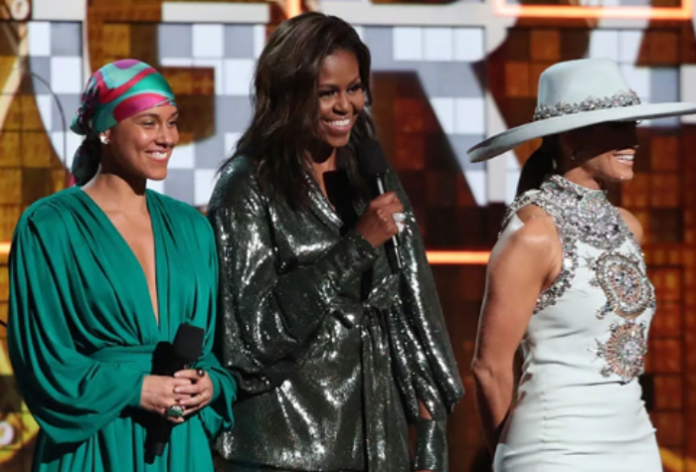 The 2019 Grammys delivered on Sunday when former First Lady Michelle Obama surprised everyone by appearing on stage with some of the most powerful women in music to inspire everyone with her own personal story of what music means to her.

Joined by host Alicia Keys along with Jada Pinkett Smith, Jennifer Lopez and Lady Gaga, who recently leveled Vice President Mike Pence and his anti-gay agenda during one of her concerts, Michelle Obama was clearly the star of the evening as each singer regaled the audience with how music has affected their lives.

When the baton was passed to Obama, she could barely get a sentence out before being drowned out by ear-splitting applause as the celebrities in attendance were absolutely starstruck and excited about having the former First Lady in the auditorium.

When the crowd finally allowed her to speak, Obama told the audience about how Motown records got her through her early years to what songs helped her through her years in the White House with her husband former President Barack Obama.

“From the Motown records I wore out on the south side, to the Who Run the World songs that fueled me through this last decade, music has always helped me tell my story and I know that’s true for everybody here,” she said. “Whether we like country or rap or rock, music helps us share ourselves share ourselves: Our dignity and sorrows, our hopes and joys. Music shows us that all of it matters, every story within every voice, every note within every song. Is that right, ladies?”

In a way that current First Lady Melania Trump could never do, Michelle Obama once again showed the world that words matter and that the First Lady has a responsibility to inspire, something the Trumps have failed to do since taking office two years ago. President Donald Trump and Melania could only dream of such a thunderous ovation on a grand stage and you can bet that his supporters are going to throw a hissy fit even though her words tonight were not political. Her appearance at the Grammys follows her dethroning of Hillary Clinton as the “Most admired woman in the world” according to a recent Gallup poll. Her husband was named “most admired man” for the eleventh straight year.

For just a few minutes, Michelle Obama reminded us why she and her family are so dearly missed inside the White House. America clearly did not understand the good thing they had until it was gone.