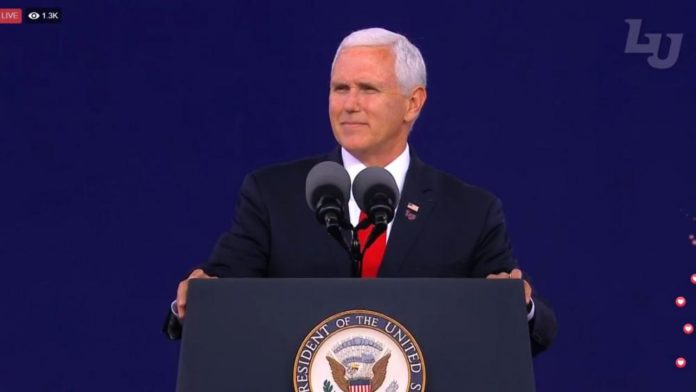 Vice President Mike Pence delivered the commencement address at Liberty University on Sunday, and in his remarks, he suggested that graduates will be discriminated against and even persecuted for their Christian faith, telling the graduates:

Pence then seemed to suggest that being a Christian in today’s world will lead to believers being openly ridiculed:

“Throughout most of American history, it’s been pretty easy to call yourself Christian. It didn’t even occur to people that you might be shunned or ridiculed for defending the teachings of the Bible. But things are different now.”

Or perhaps you’ll prefer the VP’s absurd assertion that Christians might even be burned alive, which he tried to tie to the Bible:

Pence referenced the Biblical figures of Shadrach, Meshach and Abednego is warning graduates that they are going “to be asked to bow down to the idols of the popular culture.” The three men refused to worship a golden idol and were thrown into a fiery furnace. But after King Nebuchadnezzar saw them walking around in the flames unharmed, accompanied by the son of God, he had the men removed and said their God should be worshipped. “Just know this: If, like Shadrek, Meshach and Abednego you end up in the fire, there’ll be another in the fire,” Pence told the graduates, who applauded the reference.

There’s drivel and BS, and then there’s a holier-than-thou speech from Mike Pence, and that’s exactly what Esquire writer Charles P. Pierce had to say in an article he wrote in response to Pence:

If there’s a more conspicuous combination of snowflake and drama queen in American politics than Mike Pence, I don’t want to pass the collection plate to him.

I mean, that’s a helluva deal from The Founder. The Gates of Hell can’t damage his church. I don’t think any of the cherub-faced Liberty U. grads have anything to worry about at the local multiplex, or from Joe Biden. Have a good summer, kids, and don’t worry about Mike Pence.

Christians are NOT under attack in the United States. Muslims are. Jews are. And so are atheists and agnostics.

Mike Pence is almost as full of dung as his boss. The only difference is that Pence can actually quote the Bible.