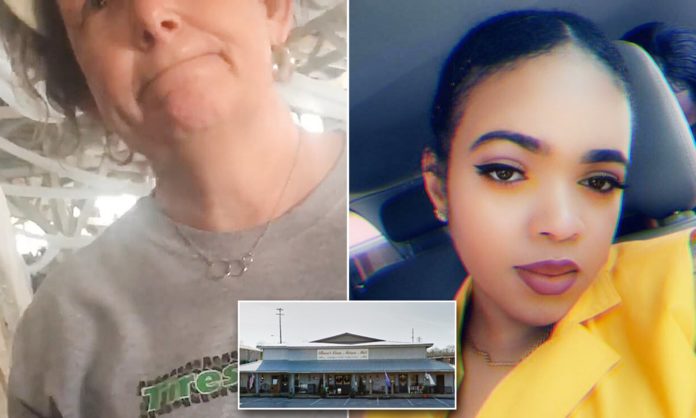 LaKambria Welch thought that her brother and his fiancée had found the perfect place for their upcoming wedding: Boone’s Camp Event Hall in Booneville, Mississippi. But then her brother told her a Boone’s Camp employee had informed him that they would not be renting to the couple because they were interracial.

That’s when Welch took matters into her own hands, HuffPost reports:

Welch said she wanted to hear firsthand why her brother — who is black and is engaged to a white woman — had been rebuffed by the venue. Welch said she was horrified when a company employee explained.

In a video filmed by Welch and posted on Facebook, a woman identified as someone who worked at the event hall said the venue did not allow LGBTQ or interracial couples to host weddings there.

In a video posted online that quickly went viral, the employee tells Welch:

“So, what in the Bible tells you that—?”

Rather than respond by citing any Bible verses, the employee attempts to end the conversation by replying:

LaKambria Welch has said a wedding venue in Booneville, MS, would not accommodate her brother and his fiancée as the venue doesn’t “do gay weddings or mixed race” because of their “Christian beliefs.” Welch said she filmed this after she went to ask why they canceled the event. pic.twitter.com/imJxkG2nr2

“The owner took a look at my brother’s fiancée’s page and wrote her back to say they won’t be able to get married there because of her beliefs. He told my mom and she contacted the owner through messenger to only get a ‘seen’ with no reply. That’s when I took it upon myself to go get clarification on her beliefs.”

All of this can be traced back to passage of a so-called “religious freedom” law by the state of Mississippi in 2016:

In 2016, the Mississippi Legislature passed a “religious freedom” law allowing businesses to refuse service to LGBT people on the basis of their religious beliefs about marriage or gender. Republican Gov. Phil Bryant signed that bill, House Bill 1523, into law.

The law, however, says nothing about race.

“In her apology, the event hall’s owner attempted to explain why she believed the Bible supported her views on interracial marriages, describing how she only recently discovered that wasn’t the case. She began by writing that as ‘a child growing up in Mississippi’ it was an unspoken understanding that people stayed ‘with your own race.’ But then on Saturday, when her husband asked her to point to relevant sections of the Bible, she couldn’t. After spending hours scouring the text and sitting down with her pastor, the owner wrote that she finally concluded that the reasoning behind her decision to turn away Welch’s brother and his fiancee was ‘incorrect.’

But LaKambria Welch says she doesn’t accept that apology:

“I am 24 and have been brought up my entire life in a Christian Family; my grandad being a reverend. If I know that the Bible doesn’t say anything about biracial marriages, she knows too.”