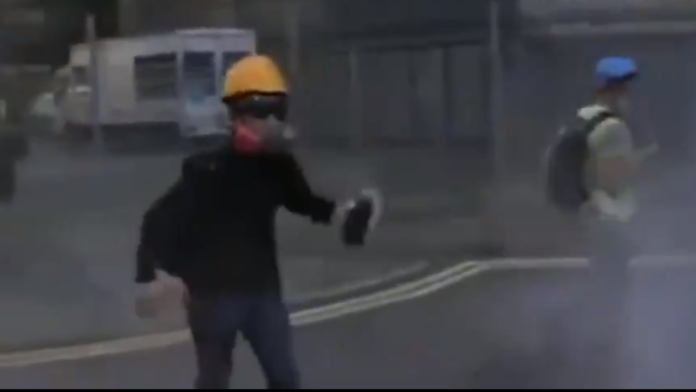 The volatile situation in Hong Kong continues to worsen as protesters who originally took to the streets in opposition to a controversial extradition law has now become a larger issue of freedom and democracy, CNN reports:

Protesters are now demanding greater democracy and an inquiry into alleged police brutality during past demonstrations. Hong Kong’s billionaires are calling for order. And as unrest intensifies, Beijing’s tone is becoming increasingly heated.

The protesters have some basic demands: A refusal to accept the now-shelved extradition bill, full democracy for Hong Kong, and police accountability.

In response to the marches and protests, Chinese authorities have used brute force and tear gas. But the protesters are getting wise to their tactics and even using science to counter the tear gas.

The video below shows a protester wearing goggles and a mask to protect against the noxious fumes. He then grabs a canister of tear gas that has been fired by police to disperse the crowd and places it into a bottle of liquid nitrogen, which turns the gas into a non-toxic solid form:

A protester in Hong Kong grabs the canisters of tear gas and drops it into liquid nitrogen, turning it into its harmless solid form.

And he makes it look casual.

Reactions on social media were filled with admiration for the protester who quite clearly was paying attention in chemistry class:

This is why smart people win.

Science the shit out of the government!

Um. McGuyver-ing the beep out of it! Respect.

Watching these protesters has been a real joy. The ingenuity in their countermeasures against the state is something to pay attention to.