The United States Blues
Home News Morning Joe Sounds The Alarm Because There Are No More Adults Around... 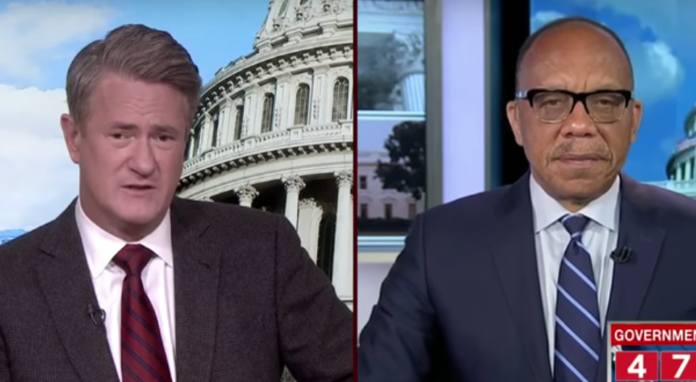 “Morning Joe” started the morning after Christmas discussing President Donald Trump’s Christmas Eve tantrum in which he complained about being “all alone,” and how the country should be alarmed that there are no more adults in the room to restrain him.

Joe Scarborough began by mentioning his recent viewing of “Home Alone 2: Lost in New York,” in which the character Kevin briefly meets Trump, who had a cameo in the film. That was back in 1992.

Over 25 years later, Trump finds himself increasingly isolated as his number of advisers shrinks because he refuses to accept any advice except his own:

I am all alone (poor me) in the White House waiting for the Democrats to come back and make a deal on desperately needed Border Security. At some point the Democrats not wanting to make a deal will cost our Country more money than the Border Wall we are all talking about. Crazy!

“It seemed a bit of a bleak Christmas inside the White House,” Scarborough remarked on Morning Joe.

The Washington Post’s Phil Rucker described Trump as being “frayed” because the walls are closing in on him legally and politically as Democrats prepare to take control of the House, which means Trump’s legislative agenda stops in its tracks and the subpoenas start to fly.

He also pointed to Trump’s lack of a proper staff to advise him, especially after Secretary of Defense James Mattis resigned in protest of his decision to surrender in Syria.

Indeed, Mattis isn’t the only staffer who has left the administration. John Kelly also resigned as chief of staff and a string of others who were fired or resigned before him.

“In the summer of 1974, leading up to President Nixon’s resignation, at least he had Kissinger and some other adults still there,” he said to “Morning Joe” guest Eugene Robinson. “We read stories from Woodward and Bernstein and others about a president at least on the verge of becoming unhinged, but this president appears to be unhinged and there are no adults left! He’s fired them all!”

In short, there’s no more adult daycare staff on hand.

Robinson responded by warning that things could now get a whole lot worse because there are no adults to restrain Trump’s worst inclinations as the economy craters, the government shutdown continues and our standing in the world continues to plummet:

“Everyone has to be concerned about what happens now,” he said. “We’ve seen almost two years now of Donald Trump with the guardrails in place, and as they’ve been removed one by one, my goodness, what happens next? It’s an extraordinary moment.”

And short of Senate Republicans actually growing a spine, Americans can only hope that Special Counsel Robert Mueller saves us and the nation from Trump’s madness.