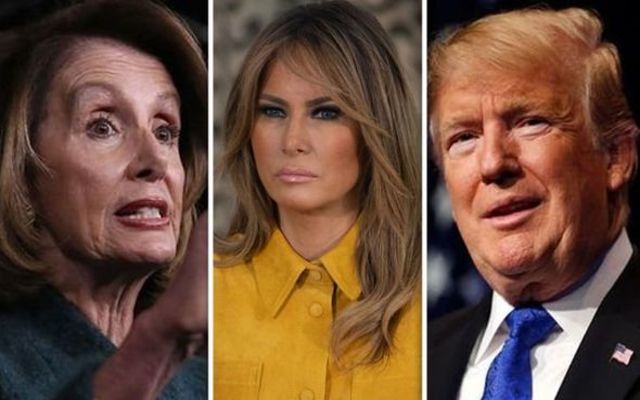 Speaker of the House Nancy Pelosi (D-CA) took a sly dig at First Lady Melania Trump while discussing President Donald Trump’s new “merit based” immigration plan during an appearance at the Commonwealth Club of California Wednesday evening, according to HuffPost:

I don’t know if merit counted for when his wife’s family came into the country,” Pelosi said of Trump. “I don’t know. Maybe it did. God bless them if it did. But he calls that ‘chain migration,’ which he wants to get rid of.”

Pelosi then noted that Trump’s plan is out of the mainstream even when it comes to Republicans of the past:

“Should we attach a green card to the diploma of so many scientists and engineers and all the rest and graduate students who train in the U.S. so that they can stay here? Of course. But that’s not the point. The point is that the president does not share the view of even Ronald Reagan and two Bushes in recent history.”

The real goal of Trump’s restrictive immigration bill, Pelosi added, appears to be an attempt to “make America white again.”

The Hill reports that Melania Trump’s parents immigrated to the United States and became citizens via what the president calls “chain migration.”

Melania Trump’s attorney told Hill.TV last year that it took “years” for the former model and her parents, Viktor and Amalija Knavs, to become permanent residents.

Even though his own in-laws were able to become citizens through the process called family-based migration, Trump has repeatedly denounced what he calls “chain migration,” claiming it brings “virtually unlimited numbers of distant relatives” into the United States.

As with nearly everything involving Trump or members of his family, there’s a glaring double standard, even to the point of this president believing that the law doesn’t apply to him.