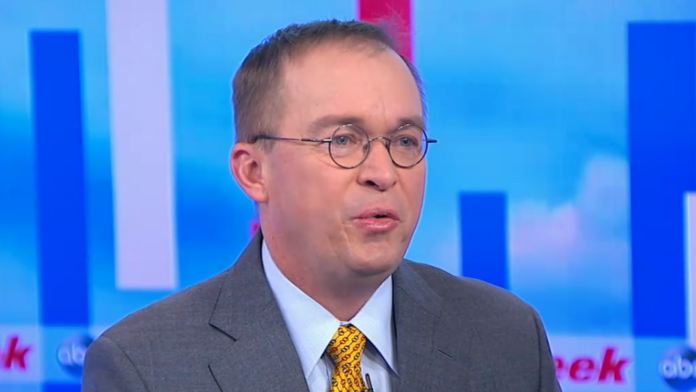 New “acting” Chief of Staff Mick Mulvaney may not last long based on comments he made Sunday during an appearance on “This Week,” admitting that Mexico won’t be paying for President Donald Trump’s oft-promised border wall.

Now that the federal government is in a partial shutdown as a result of Trump demanding $5 billion for the wall, Mulvaney could only smile when host Jonathan Karl noted that the American Treasury (and American taxpayers) would have to foot the bill for the wall on the Southern border. Mulvaney tepidly replied that he was pleased Mexico had said they would “participate in border security.”

“But none of that is Mexico paying for the wall.”

“Technically, you and I both know that it cannot work exactly like that. The Department of Homeland Security can’t actually spend money from Mexico. We have to get it from the U.S. Treasury.”

Then why did Trump repeatedly say during the campaign that Mexico would pay for the wall? Why has he continually repeated that lie, even going so far as to claim that Mexico will indeed pay for the wall via the new trade deal? He stacks one lie atop another and then doubles down when anyone dares to point to facts that suggest otherwise.

Mulvaney also appeared on Fox News Sunday, and was reminded by host Chris Wallace that he once called the idea of a wall “childish. Specifically, in 2015, Mulvaney commented:

“The fence doesn’t solve the problem. Is it necessary to have one? Sure. Would it help? Sure. But just to say build the darn fence and that be the end of immigration discussions is absurd and almost childish for someone running for president to take that simplistic a view.”

Wallace read those remarks back to Mulvaney and then asked:

“If building a wall is childish and simplistic as a solution for the immigration problem, why is it worth shutting down the government?”

The chief of staff replied:

“It has to be part of a comprehensive [immigration bill].”

So Wallace hit Mulvaney with an inconvenient fact:

“But it isn’t! You’re not saying it’s part of any comprehensive immigration plan.”

The mealy-mouthed Mulvaney could only respond:

“The border wall is absolutely necessary, which is why we’re having the battle. We need a comprehensive solution and a border barrier, steel-slat fence, has to be part of that.”

Here’s a suggestion: If the wall is so damn important, why doesn’t Donald Trump donate the money for it out of his own wealth, which he assures us is enormous? Two reasons: He’s too cheap to spend a dime on anything but himself, and because he knows it’s a waste of money.