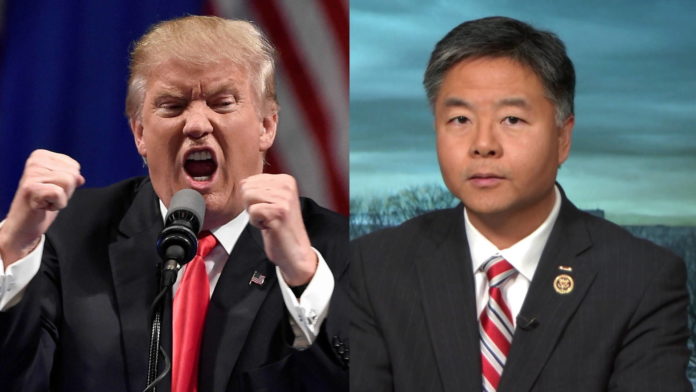 Now that President Donald Trump has forced Defense Secretary James Mattis out of the administration because Mattis dared to disagree with the president on his Syria policy, many members of Congress are warning that there truly is no one standing in Trump’s way should he decide to suddenly launch either a war or nuclear weapons in order to divert attention from his growing legal woes.

One of those is Rep. Ted Lieu (D-CA), who went on Twitter and aimed a sharp barb at the president:

Via tweet, @realDonaldTrump has announced he would install Patrick Shanahan as Acting Secretary of Defense and force out Mattis two months early.

How to describe this?

Yes, on Sunday Trump announced Mattis’s replacement with a tweet:

I am pleased to announce that our very talented Deputy Secretary of Defense, Patrick Shanahan, will assume the title of Acting Secretary of Defense starting January 1, 2019. Patrick has a long list of accomplishments while serving as Deputy, & previously Boeing. He will be great!

Lieu was joined by others on social media in his total disdain for Trump:

Remember when people said a woman would be too emotional to be President? Good times.

Representative Lieu — it’s all those things. But more importantly it’s reckless and possibly dangerous. Shanahan is a neophyte with little experience. He’s not even leaving enough time for a proper handoff.

Until Mattis put Trump on notice; no one, not even Congress had the brass to give such a strong rebuke.

The President is a clear and present danger to our own national security; impeach him if you must or just shut up and let him continue wrecking what’s left of the country.

I would have Mattis testify to Congress about his sanity. Something Criminal Conman Trump never had.