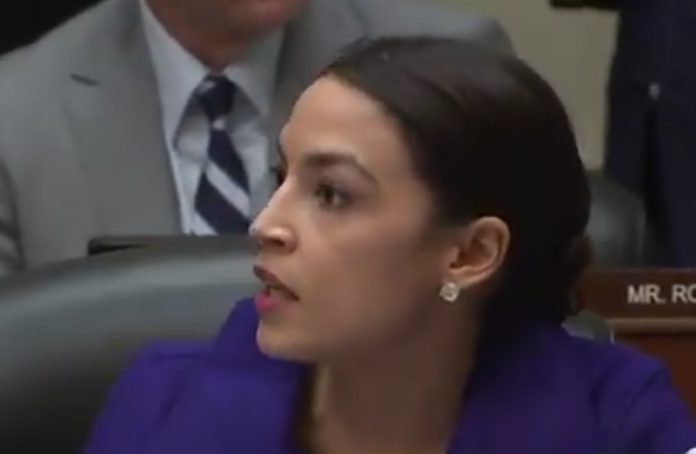 As the youngest member of Congress, Ocasio-Cortez has an edge over her older colleagues when it comes to technology and communications. And she used that experience during a House Oversight Committee hearing to stress how important it is to conduct a thorough investigation into the security clearances scandal Trump and several members of his administration are embroiled in right now.

Longtime White House Personnel Security Office employee Tricia Newbold recently came forward to testify that a lot more administration officials were denied security clearances than previously thought. We all know that Trump intervened to get his son-in-law Jared Kushner and daughter Ivanka Trump their top-secret security clearances over the objections of intelligence officials.

But now we know that 25 other people with “disqualifying issues” were denied security clearances by intelligence officials, only for Trump to intervene again to reverse the decisions.

That means there are over two dozen people working inside the Trump administration who are compromised that have security clearance access to some of the most sensitive information in our nation and government. And they could be easily leveraged by hostile nations such as Russia or China to leak that intel.

Ocasio-Cortez expressed outrage and urged the committee to subpoena administration officials to get to the bottom of this scandal.

“I think it’s important that we refocus on what is at stake here in this investigation in this matter,” she began. “We are getting reports from the press and a wide variety of sources that indicate that we are conducting foreign relations by people with security clearances via WhatsApp!”

“Every day that we go on without getting to the bottom of this matter is a day that we are putting hundreds if not potentially thousands of Americans at risk,” she continued. “I mean, really, what is next, putting nuclear codes in Instagram DMs? This is ridiculous. We need to get to the bottom of this. And in order to do that, we have to issue subpoenas because people in this administration are not cooperating. And every day that there is an insecure line of communication that can be leaked, that can be hacked, that can be screenshotted without proper channels is a day that we are putting out national security at risk.”

Ocasio-Cortez went on to commend both Democratic and Republican leaders for supporting and protecting whistle-blowers who risk their jobs to come forward.

.@RepAOC @AOC: “Every day that we go on without getting to the bottom of this matter is a day that we are putting hundreds if not potentially thousands of Americans at risk. I mean, really, what is next, putting nuclear codes in Instagram DMs?!? This is ridiculous.” pic.twitter.com/EkTPWbwIn4

Trump has proven time and time again that he is the top national security threat America faces. And this scandal is just further confirmation. Congress must act. People who are denied security clearances for good reasons should not be able to get them via intervention from the president. And the president should certainly be responsible enough to listen to our intelligence agencies. Not doing so is misconduct of the highest order and the American people should demand answers for this reckless behavior.