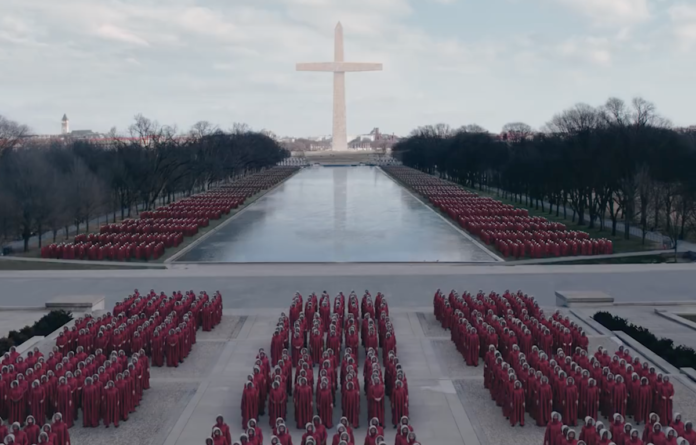 References to The Handmaid’s Tale have skyrocketed in the age of Donald Trump and Mike Pence. Now, reports from China indicate an even more alarming similarity to the fictional totalitarian regime which treats women like dehumanized baby-making machines for the state.

A Dutch researcher named Victor Gevers discovered an open Chinese database which listed the “BreedReady” status of some 1.8 million women. The strange word could translate to the Chinese for describing if the women are of child-bearing age, according to the Guardian.

Along with the womens’ potential for giving birth, the database also listed how to reach the women by phone, their address, their age, marital status, and level of education.

Other fields in the database appear to point out if a woman “hasvideo,” their “political” views, and even Facebook profile pages, though Facebook is not technically allowed in China.

Gevers also identified another even larger database created by a company that is using surveillance on 2.5 million residents in Xinjiang.

The Guardian points out that Chinese internet users have likened the news to The Handmaid’s Tale on a discussion forum.

“This kind of database is very indicative and frightening,” said one user, adding: “I’m a pessimist and the fact that stories like The Handmaid’s Tale exist means the signs are already there.”

After Gevers and the Guardian revealed the mysterious database, it was pulled back down.

The unprotected database is not reachable anymore for the last 5 hrs. We will keep an eye on that IP address for a while to make sure it doesn't come back online. We still do not know how the owner was or what the database was actually designed for. When we do we will share this.

The database listing the women’s personal information comes at a time when the Chinese government is pushing for citizens to have two children after initiating a One-child policy in the late 70s and early 80s. The policy was created to help counter overpopulation. Now China’s population is projected to shrink slightly, which could hurt the economy. China seems to have changed its mind about overpopulation.

A sociologist who has interviewed Chinese women in their late 30s, Ye Liu says many Chinese women feel like lab rats, jerked around by the government.

“They feel like they were experiments of the state. They were the experiments [under the one-child policy] and now they are another experiment,” said Ye.

“They feel like they are forever being used by the state laboratory,” Ye says.

The government went about coercing the One-child policy in ways that came to be resented by its citizens.

“‘Officials once restricted population size through heavy fines, forced abortions, and sterilizations.’ Now the government is using what could amount to coercive methods for the opposite goal, to have more kids.”

In some provinces, officials have banned abortion after 14 weeks, required signatures from three medical professionals for any abortion, and made it harder for citizens to get divorced, requiring partners to go through a “mandated cooling-off period” first.

At the same time, the economy worked to enforce the One-child policy all on its own. Parents have decided to have fewer kids due to having little time and money to spend on children, a case that we can recognize all-too-well in America today.

Factors leading to a decrease in population in America include: lower levels of immigration, population aging, and declining fertility rates.

Now, as the population’s every move becomes noted in databases and reviewed on surveillance cameras, the women of China appear to be further along in the Handmaid’s Tale than in America. Or are they?

If men can force you to carry a child for them, then The Handmaid’s Tale is already here. We just don’t have the uniforms yet. https://t.co/lHuxgBTERB

MAVERICK LIFE INTERVIEW: The Handmaid’s Tale’s Ane Crabtree, on dressing the oppressor and the oppressed https://t.co/qJvBc2IVgj By Malibongwe Tyilo pic.twitter.com/vvIiEkza9r

Washington, D.C., turns Gilead for a day, as The Handmaid's Tale films on the national mall https://t.co/hHbxqND12h pic.twitter.com/zVc7EcG5Ee