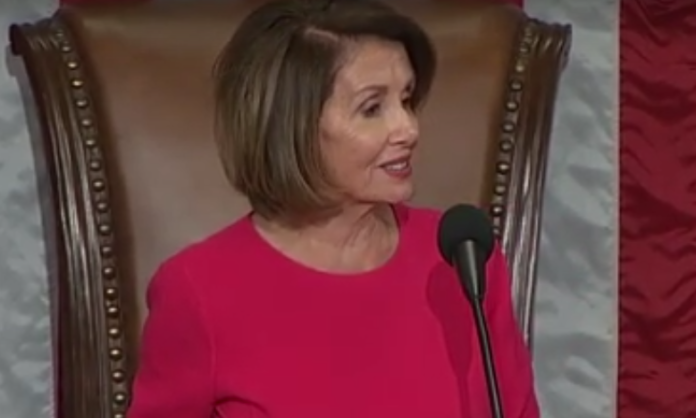 It’s a moment millions of Americans have been waiting for since the election in November when Democrats won 40 seats to wrest control of the House from Republicans.

After two years of Republican rule that accomplished nothing allowed Trump to reign unchecked, Democrats officially took over the gavel as House Minority Leader Kevin McCarthy handed it to Pelosi in a civil transfer of power that must have made Trump throw quite a temper tantrum in the Oval Office or wherever he is watching television in the White House.

Pelosi laid out the Democratic agenda piece by piece, vowing to fight for better healthcare, stronger environmental laws, stop and reverse climate change, hold lawmakers accountable, rebuild our infrastructure and re-establish ethical and transparent governance that has been missing since Trump took office.

Indeed, a new sheriff is in town, and Pelosi took no prisoners as she looked Republicans squarely in the eyes and invoked Reagan in defense of Dreamers, immigrants who were brought to this country as children and is the only home they have ever known.

“And we will make America more American by protecting our patriotic, courageous Dreamers!” she declared. “And when we are talking about the Dreamers let us remember what President Reagan said in his last speech as President of the United States: “If we ever closed the door to new Americans, our leadership role in the world would soon be lost.”

Republicans sat dumbfounded as if Pelosi had just thrown a concussion grenade into their side of the chamber. They literally could not bring themselves to even applaud the words of Ronald Reagan because they are frightened of Trump or are too racist and hateful towards immigrants to care. They remained silent and unmoved as Democrats cheered.

Here’s the full speech via YouTube. Pelosi’s remarks about Reagan are at the 14:35 mark.

For weeks, Trump has been demanding billions of taxpayer dollars for a border wall and has been waging war on immigrants, especially those who are not from predominantly white countries. He even shut the government down in pursuit of it, a shutdown that Pelosi addressed in her speech by introducing legislation to fund most government agencies and departments affected for the next year. It’s the same legislation Republicans supported in the Senate just before Christmas that also did not include wall funding.

So, Pelosi not only slapped Republicans in the face with that legislation, she burned them using the words of a former president conservatives have idolized for decades. And when Republicans failed to applaud, they demonstrated just how far to the right the party has swung, and how far it has fallen since it’s height 30 years ago. It’s a brilliant opening move by a Democratic House Speaker that sets a new tone for a Congress that desperately needed a change.