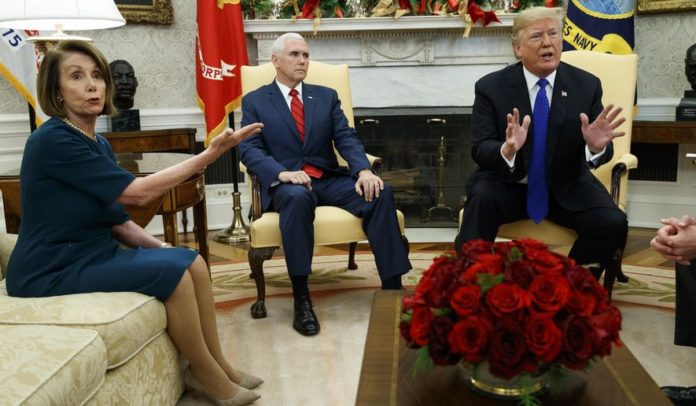 Incoming House Speaker Nancy Pelosi (D-CA), is turning up the heat on President Donald Trump and his demand for billions of dollars to build a wall on the Southern border, noting that the “wall” is now more of a curtain based on recent comments from the president.

During an interview with USA Today, Pelosi openly mocked Trump’s shifting definition of what his wall will look like:

“First of all … he says, ‘We’re going to build a wall with cement, and Mexico’s going to pay for it.’ While he’s already backed off of the cement, now he’s down to, I think, a beaded curtain or something.”

Pelosi added that Trump is “being a fear monger” with this constant suggestions that a wall is needed to keep out criminals:

“He’s using scare tactics that are not evidence-based, and it’s wrong.”

With the federal government still in shutdown mode due to the president’s demands for at least $5 billion in funding for the border wall, Pelosi also hinted that Democrats will indeed move to reopen the government when they take control of the House on January 3:

“But one thing’s for sure, the first week of January, we will be passing legislation to open up government.”

For his part, Trump doubled down Tuesday on his insistence that Congress give him money to build a wall he once promised would be paid for by Mexico:

Just last week, Trump did seem to change his definition of what exactly the “wall” would look like, tweeting out this:

A design of our Steel Slat Barrier which is totally effective while at the same time beautiful! pic.twitter.com/sGltXh0cu9

It remains to be seen if indeed the “steel slat barrier” will now morph into a piece of muslin or some other ridiculous concoction that the president thinks will allow him to save face.