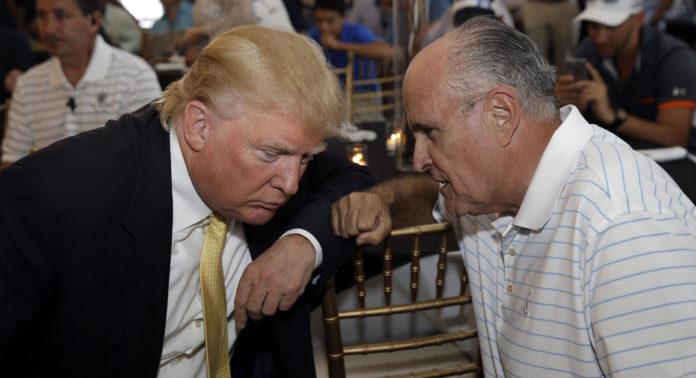 The infamous call with Ukrainian President Volodymyr Zelensky which has led to a formal impeachment inquiry, began months earlier when President Donald Trump sidelined top national security officials in the administration and gave power to political loyalists, including Trump’s personal attorney, Rudy Giuliani, according to a report from the Washington Post:

The sequence, which began early this year, involved the abrupt removal of the U.S. ambassador to Ukraine, the circumvention of senior officials on the National Security Council, and the suspension of hundreds of millions of dollars of aid administered by the Defense and State departments — all as key officials from these agencies struggled to piece together Giuliani’s activities from news reports.

Discussions and machinations that took place inside the Oval Office led White House insiders to fear that the president was planning to use whatever leverage the United States had with the new Ukrainian president in order to gain political advantage in the 2020 election. Some tried to postpone any meeting or phone call between Trump and President Zelensky:

“An awful lot of people were trying to keep a meeting from happening for the reason that it would not be focused on Ukraine-U.S. relations,” one former official said, speaking on the condition of anonymity to discuss the sensitive matter.

As we learned this week, Trump himself admitted that he did indeed use the call with Zelensky to ask for dirt on former Vice President Joe Biden or his son, Hunter, who had business dealings in Ukraine. That was in part what led to a whistleblower complaint filed and passed up the channels of the U.S. intelligence community that has become the focal point of a scandal which has triggered the impeachment inquiry announced Tuesday by Speaker of the House Nancy Pelosi (D-CA).

But it was Giuliani who appears to have been the point man for Trump when it came to obtaining damaging information on the Bidens, and that has led to many blaming the former New York City mayor for putting the administration in such a precarious legal predicament:

“Rudy — he did all of this,” one U.S. official said. “This s—show that we’re in — it’s him injecting himself into the process.”

Shortly after the conclusion of the Mueller investigation, the Post reports, Giuliani turned his focus to obtaining information from Ukraine:

“(He) soon began pushing for personnel changes at the embassy while seeking meetings with Zelensky subordinates. He also had his own emissaries in Ukraine who were meeting with officials, setting up meetings for him and sending back information that he could circulate in the United States.”

All of the allegations against the Bidens that Giuliani later shared with Trump (who happily parroted them on Fox News) were later proven to be nothing more than rumors without facts or substantiation. But despite that, the president pressed Zelensky to dig up dirt on the Biden family and hand it over to him.

Perhaps most ironic of all is that Trump’s personal attorney may well have placed him in the sort of political and legal jeopardy that could lead to his removal from office.