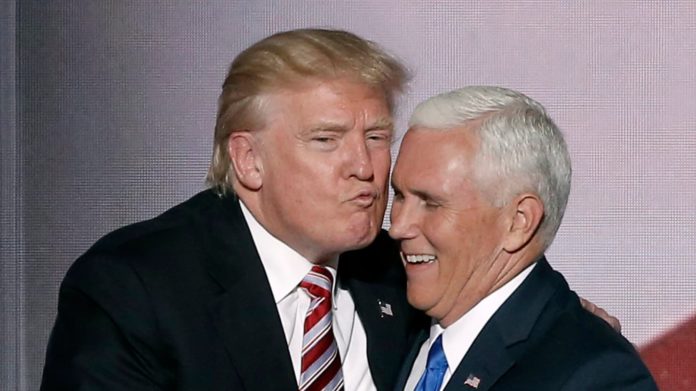 It appears that the relationship between President Donald Trump and Vice President Mike Pence is not as rosy as Trump wants everyone to think it is, because a new report suggests tensions between the two are growing more strained ahead of the 2020 election.

Pence has been a loyal stooge for Trump since taking office, defending even the most un-Christian behavior that would have sent evangelicals into fits of hysteria in years past, especially if a Democrat were doing it.

The former Indiana governor has been ripped for that hypocrisy, but Trump only brought him aboard to appeal to evangelicals. Now that he has them eating out of his hand regardless of what he does, Pence is expendable.

But would Trump really replace Pence on the ticket in 2020?

If Jared Kushner and Ivanka Trump have their way, it’s very possible, especially since tensions are growing between the president and his vice-president, and Trump could be getting jealous over the fact that Pence is more popular than him.

According to Yahoo News:

Behind the scenes, tensions have been mounting among Trump, Pence and their top advisers ever since the GOP’s resounding losses in the 2018 midterms. In the weeks afterward, Trump asked aides about replacing Pence on the ticket, and he asked again for their thoughts on Pence during his August vacation at his golf course in Bedminster, N.J., according to Trump advisers who spoke on condition of anonymity to talk about private discussions with the president.

So, Trump has allegedly asked about replacing Pence, and it’s rumored that former UN Ambassador Nikki Haley, who has Jared and Ivanka’s support, is the favorite to replace him.

Trump’s poll numbers are rapidly deteriorating in swing states across the country, and of particular concern to Republicans is the loss of suburban women in light of Trump’s trade war and the frightening anti-abortion bills being pushed in red states.

Jared and Ivanka seem to think that putting Haley on the ticket would stop the bleeding.

The relationship between their political teams has soured greatly in the past year, according to a dozen Trump and Pence aides and Republican advisers familiar with the dynamic. In particular, rumors that Kushner and Ivanka Trump wanted to consider replacements for Pence — specifically trying to find a woman running mate to help win back the suburbs in 2020 — have worried the vice president’s camp, according to Trump and Pence campaign advisers.

Advisers for Trump and Pence both spoke about the growing tensions.

“The perception is that Pence’s team is difficult to work with,” a Trump adviser said. “That just doesn’t come up organically. Somebody is saying that to the president.”

That “somebody” is likely Ivanka and Jared, who apparently have a knack for causing chaos in the White House.

“There are certain pockets out there that want to solve their problems by replacing the running mate,” a Pence adviser said.

“But we’re on the team,” he insisted. “We might be JV, but we’re helping reelect him.”

Still, there is plenty of confusion.

“People come into the VP’s office trying to find out what’s going on with Trump, and he can’t give them an answer,” an RNC member said.

It’s possible that Trump has even been testing Pence’s loyalty by having him perform embarrassing tasks like staying at Trump’s Ireland resort on the taxpayer dime, something that Republicans would have screamed bloody murder over had former President Obama owned hotels and former Vice President Joe Biden had stayed in one of them while on official business.

For now, Pence appears to be passing the tests, but Trump is volatile and could easily throw Pence under the bus at the last minute for any reason.

For now, we’ll just have to wait and see what unfolds, but the relationship between Trump and Pence is clearly in worse shape than either of them is willing to admit to the public.