The United States Blues
Home Elections Rick Santorum gets his a** handed to him for writing off Democratic... 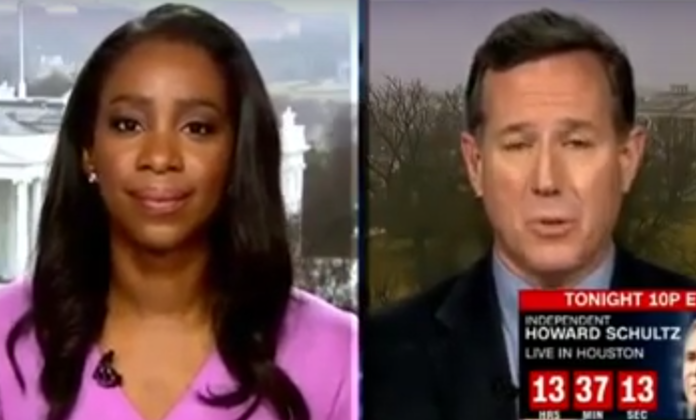 CNN political analyst Rick Santorum walked into a buzzsaw on Tuesday morning when he insulted the diversity of the Democratic Party presidential field.

Rather than simply admit that the Democratic Party represents the diversity of America far better than the lily white male-dominated Republican Party, Santorum claimed that Democrats are just engaging in “identity politics” to pander to women and people of color.

First, former White House press secretary Joe Lockhart commented on the diversity of the 2020 field by pointing out that many white male Democrats have declined to enter the race, which is likely due to the excitement of possibly electing the first woman president or the second person of color. Such a candidate also offers a clear distinction from Trump who could rally the country behind them.

But then Santorum opened his mouth to reply:

“It’s interesting to me that Joe broke the race out the way he did — men, women, people of color and that those are the lanes,” Santorum said, ignoring the popular policies the candidates have been offering in order to focus on skin color and gender. “I think maybe increasingly the Democratic Party is an identity politics type of party, maybe it’s not political policies, maybe it’s all about skin color and race.”

Reporter Abby Phillip had had enough, so she took Santorum to the woodshed and corrected him:

“It could also be that the Democratic Party is running candidates who look like the country,” she said. “It should not be unusual that women and people of color are running for president when they comprise a large portion of the population in the United States. The anomaly is a party in which only white men run for president. My point is that the framing of the diversity in the Democratic Party is not solely about identity politics. It’s just simply about the fact that in 2019 there are people who look like the voters they want to attract to vote for them running for president.”

Indeed, even Republican strategists have admitted that the Democratic Party looks more like the diversity of the country than the GOP does, which is a major negative for Republicans going into 2020.

Phillip continued schooling Santorum, who could not handle it.

“They are not necessarily running just to represent black people or women or whatever,” she concluded. “They are running to represent people who they want to vote for the suggestion that it’s identity politics, that they are appealing to people because of race, I think that’s an overly simplistic way of looking at this.”

This race is not about identity politics. It’s about America changing. Demographics have been shifting tremendously for years, and Republicans don’t like that because it means their white male base is shrinking. That’s a huge disadvantage for Trump going into 2020, and you can bet that Democrats up and down the ballot will ride the coattails of whoever ends up being the Democratic nominee, especially if the nominee represents the diversity of the nation. That means Republicans could be staring at a blue wave that sweeps them completely out of power and would be forced to rebuild the party to compete with a Democratic Party that represents America or be left behind.