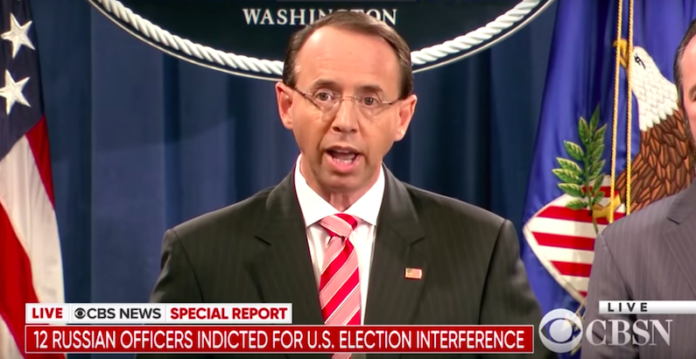 The revolving door of the Trump presidency just claimed another victim, with the Department of Justice’s Rod Rosenstein signaling that his resignation from his post is imminent.

The Deputy Attorney General has enjoyed a longer tenure than most in the Trump administration, and perhaps even more job security due to the Special Counsel Office’s investigation into collusion between the Trump campaign and the Russian government.

Though the president has signaled his displeasure with the investigation many times, any concrete aggression from the White House could be enough to immediately trigger impeachment proceedings by a newly Democratic House of Representatives, some of whom have stated that exact goal. However, even though Rosenstein has received relatively less abuse than the president’s other enemies, he still receives barbs from the president for appointing a special counsel in the first place and approving a FISA warrant.

The Washington Post said I refer to Jeff Sessions as “Mr. Magoo” and Rod Rosenstein as “Mr. Peepers.” This is “according to people with whom the president has spoken.” There are no such people and don’t know these characters…just more Fake & Disgusting News to create ill will!

Back in September 2017, there was speculation about a Rosenstein resignation that did not come to fruition, which could have been the beginning of the end. In a report, the New York Times states:

“Mr. Trump has nominated William P. Barr to be attorney general, after he fired his first attorney general, Jeff Sessions. Mr. Sessions recused himself from overseeing the Russia investigation in 2017, which is when Mr. Rosenstein stepped into that oversight role. His oversight lasted until the appointment of the interim attorney general, Matthew Whitaker, in November.”

Both Barr and Whitaker have shown opposition to the ongoing Mueller investigation, with news reports even claiming that the president spoke to interim AG Whitaker about it.

The future is difficult to predict, but this shake-up in the Department of Justice could prove to be the moment Trump is looking for … or not. According to CNN, Rosenstein is not simply resigning — he is resigning with a big caveat.

CNN: Rod Rosenstein has signaled to officials that he would leave the job when he was satisfied that Mueller’s investigation was either complete or close enough to completion that it was protected.